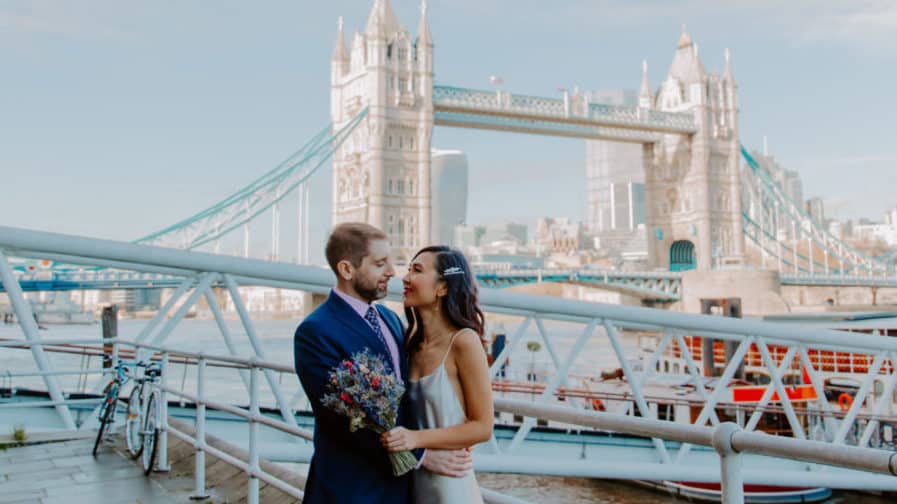 Winnie and Tony on their wedding day

A couple whose new married life has been on hold for nearly a year by COVID-19 visa delays have told the News how the ‘unfair’ system left them in limbo.

They had met and fallen in love while working in Hong Kong, later deciding to move to the UK, Tony’s home country, to start their new life together.

As Winnie is a Canadian national she first had to apply for a fiancee visa and, after marrying, upgrade to a spousal visa.

But, due to a huge backlog at the Home Office, both applications became stuck, with the pair waiting over eight months for a decision.

Winnie was even unable to join her fiance in the UK between February 2020 and October 2020, only arriving two months before their wedding, all during the height of the pandemic.

Once allowed in the country she still had to wait for her visa to be upgraded to a spousal one and during that time was unable to work or even apply for jobs – leaving both of them reliant on 36-year-old Tony’s single income from his work as a data analyst.

They say they are among hundreds of families who were effectively left in limbo during the pandemic.

Usually applicants can pay around £800 to fast track their visa application; a service which can give decisions within as little as 48 hours. However, this option was suspended during COVID-19.

Nonsensically, fast track applications have now restarted – but only for new applicants and not those already stuck in the system

Speaking to us earlier this week, Tony and Winnie explained how the delays had affected them over the last year.

Tony said: “Winnie has been unable to work at all since arriving in the UK in October and this delay has significantly impacted her mental wellbeing and ability to restart a life here. We would like to purchase a home, build a life together and, eventually, start a family in the UK, but all of this has been put on hold while we wait for Winnie’s visa application to be processed.”

Winnie, 33, added: “We at least managed to celebrate our wedding but the impact of the delays with my visa continues to be the same and my mental wellbeing has been shattered.

“I haven’t been able to build any social network because of lockdown and being unable to get a job.

“We have been reliant on savings and a single income from Tony to get us through. I thought it was an easy and straightforward process. We had to demonstrate a lasting relationship for my first visa and then the spousal one is much easier in that it was about producing evidence that we have got married.

“Eighteen weeks later I started doubting myself. It is like being in a black hole where you call up the Home Office and wait on hold for 40 minutes every two weeks.

“We’ve played everything by the book and appreciated that during the pandemic we couldn’t do the priority service, but now they’re allowing it again and letting other people through who have applied after us – how is it fair that other people are getting decisions in two days?

“If you have a target for processing within eight weeks and are struggling to make that target and leaving people for months without a decision then why open it up to other people to jump the queue?”

In some good news, after the News contacted the Home Office this week, a spokesperson confirmed Winnie’s application had finally been approved. A spokesperson said: “Like many services, the pandemic had an impact on visa processing times. The vast majority of these applications have now been decided and a small remaining number are in the process of being completed. We apologise for any inconvenience this may have caused. Mrs Sham’s application has been granted and she has been informed of this decision.”

The Home Office says it has hired additional staff to help clear its backlog and new applications are now being processed within usual times.

For goodness sake there has been a pandemic and many people have died or lost their loved ones . Your visa is of no consequence