“I think [local people] think they’re voting for Labour, and voting for me. They’ve got a long-standing loyalty to the party, which is not necessarily affected by who is the leader," Harriet said 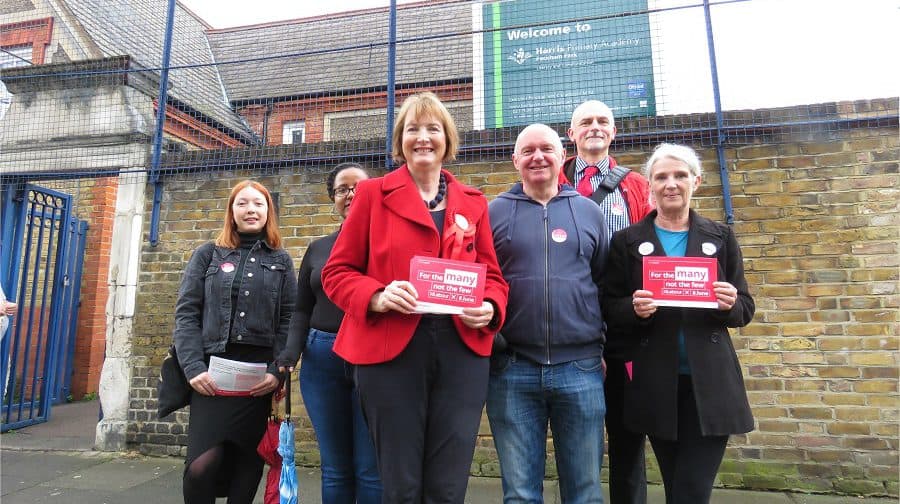 I join Harriet Harman with a group of party activists offering campaign leaflets to mums on the school run at Harris Primary Academy Peckham Park.

Harriet says that just the other day she spoke to a local head teacher who “spent eleven hours trying to work out how they were going to make their budget work, because of the Tory education cuts. But they just couldn’t.”

One mum pops over and tells Harriet she’s a nurse at Lewisham Hospital, and is worried about staff shortages.

About half of them recognise her, and those who do enthusiastically say they’ll vote Labour. But that’s probably not surprising for someone who’s been in business as Camberwell and Peckham’s MP for 34 years.

So what is her message for the people who don’t know her, or are undecided? Is the emphasis on getting her back as their MP, or is it on putting Jeremy Corbyn in 10 Downing Street?

“It’s about your sense of what is your best leading edge,” Harriet says. “In 1997 Tony Blair was way ahead of the popularity of the party, and way ahead of me. People would come in and go ‘how do I vote for Tony?’ It varies from election to election.

“I think [local people] think they’re voting for Labour, and voting for me. They’ve got a long-standing loyalty to the party, which is not necessarily affected by who is the leader.”

As it’s brand Labour and brand Harriet, the constituency MP, that she’s pushing, I try to get a sense of her feelings on Southwark’s Council’s ever-topical drive for regeneration.

I ask if she’s read or commented on the council’s New Southwark Plan, and its proposals to demolish the Peckhamplex and multi-storey car park, and build homes on Choumert Grove car park and on Peckham Square by pulling down Peckham Arch. “No” is the answer.

She said: “I tend to think it’s the responsibility of the council, as they’ve got their elected representatives to be responsible for that. Sometimes I think the idea of the MP being the alternative planning authority is not particularly good.

“I know there’s a lot of complaints about the Peckham Arch and the Square. But I remember people complaining when the arch was set up.”

Bearing in mind these are some of the most high-profile issues in the local area, I suggest her attitude might seem rather carefree?

“It’s not carefree, it’s constitutional,” she says. “If I thought the councillors weren’t caring, I would get involved. Sometimes if there’s a conflict I’ll try and resolve it. But I don’t try and second guess the council’s planning decisions.”

By far the most controversial and long-running story in her constituency has been redevelopment of the Aylesbury Estate.

Harriet says she disagreed with the secretary of state’s decision last September: that eight leaseholders in Phase One of the regeneration scheme would have had their human rights “contravened” by the council’s attempted compulsory purchase order (CPO) of their homes (for as little as £180,000).

She calls it the “perilous” outcome of what happens when people use Right to Buy on big estates.

She “sympathises” with the affected leaseholders, but says the council “can’t pay above market value, and the market value is affected by the fact that it’s going to be redeveloped.

“People can claim human rights, that doesn’t mean it’s a human right violation. I just think it’s a very difficult situation for those individuals. I think the council needs to press on with the legal processes and try and find a solution so it’s not held up.”

Whether that “solution” is for the council to continue its game of chicken with the government, or offer a more generous deal to the leaseholders, Harriet doesn’t say.

Sticking with housing, I ask if the Tory’s new pledge to build 100,000 council homes per year is an attempt to shoot Labour’s fox effectively by mimicking them.

“I don’t believe they’ll do it. There’s not a cat’s chance in hell,” Harriet counters. “There’s a reality, which is that more people could have access to affordable housing, council houses are kept in better condition, and it’s with a Labour government. It’s the opposite with a Tory government, and that’s the way it’s always been… It’s a false promise.”

Away from the constituency, and towards Europe. Labour’s manifesto says not securing a trade deal with the EU after leaving the Single Market would be “unviable”. The Conservatives say “no deal is better than a bad deal”, while Labour says the opposite.

But does Labour’s stance imply Britain needs the EU more than it needs us, and does that put Britain in a weakened bargaining position? Might that expose us to the more extreme suggestions already made by EU chief negotiator Michael Barnier, that Britain could be handed a £100bn leaving fee?

She says without a trade deal “we would be the biggest loser” – more or less agreeing that we do need the EU more.

“The reality is we’re a much smaller unit to form trade agreements with, than when we are part of the EU. It’s an ongoing experiment. And the people who will be hit hardest are the people at the bottom, like people who live here, not people at the very top like Boris Johnson.”

She brushes aside any suggestion the proposed £100bn leaving fee might be unreasonable. “If we’ve got ongoing liabilities that we’ve gone into, we’ve got to buy out of them. We can’t just walk away.

“We always said if we left the EU there would be a bill to pay. And the Leavers all said ‘no we’ll have £300m for the NHS, and that was wrong’.”

At the time of this interview, we’re 23 days from the morning that the election result will be called. She insists she won’t “speculate” on what the fallout might be if Labour were to suffer a heavy defeat, and is adamant her focus is on “campaigning to win”.

Nonetheless, Harriet has a precise answer for whether Corbyn should stay or go if Labour suffers another defeat. “I do take the view that leaders have to take responsibility… because the buck stops with you, and you can’t blame anybody else. It’s no good seeking alibis when things don’t go right. Ultimately, the leader can claim success, and when there’s a failure the leader has to own that failure.”

And what would “taking responsibility” mean in any practical sense for Corbyn?

She gives three examples of Labour leaders (Neil Kinnock in ’92, Michael Foot in ‘83, and Gordon Brown in 2010) – who took failure on the chin and resigned.