"You need to understand that the people running this smear campaign ... these are antichrist," he said. 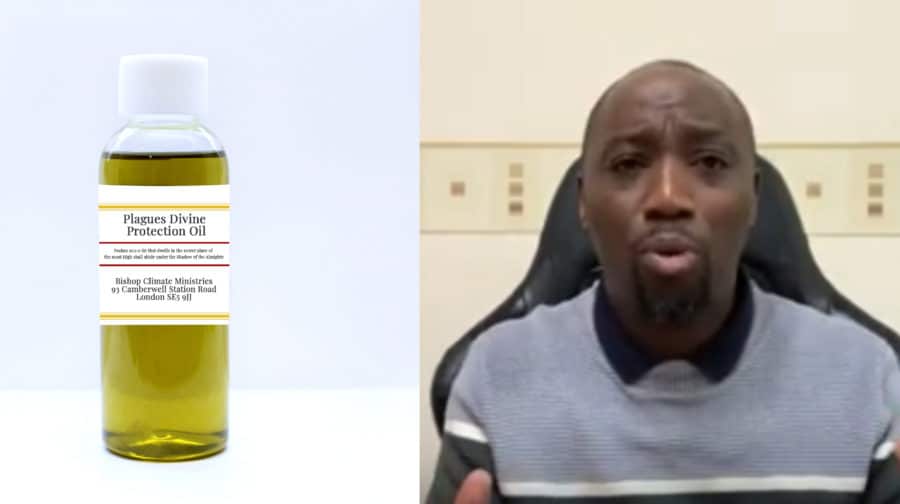 The pastor at the centre of a media storm after selling oil he claimed would protect from coronavirus has said it is a “smear campaign” being run by “antichrist.”

Camberwell’s Bishop Climate Ministries has found itself catapulted into the national spotlight after the News broke the story over its £91 coronavirus ‘plague protection kits’ made of only oil and red string.

Its leader and self-styled prophet, Climate Wiseman, has hit back at the reports, calling them an “evil accusation.”

“You need to understand that the people running this smear campaign … these are antichrist,” said Mr Wiseman in a press conference posted on YouTube this afternoon.

It is entitled ‘Update From Prophet Climate About The Evil Accusation Going Around On Media.’

“There have been people going around saying I am exploiting people, I am not exploiting anybody.

“It’s a smear campaign that’s been run by not any other than the secular, I’m talking about the secular movement … people that hate God.”

Mr Wiseman denied he had made any money from selling the £91 kit, which has now prompted an investigation by both Southwark Council and the Charity Commission.

“I’m not exploiting people. This is not just a normal oil. This is according to the ingredients in the Bible and it is very expensive,” he said.

“We are not making profit out of it, all we wanted to do was offer a solution.”

The faith healer, who is also a bishop and trustee of the Kingdom Church, insisted that the oil being sold by Bishop Climate Ministries was not connected to the church.

Posts from the prophet uncovered by the News had originally stated: “You can be saved from the Coronavirus pandemic by covering yourself with the Divine Plague Protection Oil and wearing the Scarlet Yarn on your body.”

It has now been edited to remove reference to specifically protecting from coronavirus.

The News has previous for this, having been denounced from the pulpit of Southwark Cathedral after highlighting the Cathedral’s silence over the controversial Thameslink 2000 scheme through Borough Market.

Hopefully he prays that his god sends a plague of locusts, or something, to the Southwark News, because we all know that praying is just divs talking to their hands.

Even if called by God, his character is not in a right place. A d he needs to work on that, people who came into contact with him did not like him, said that he us manipulative and questionable character