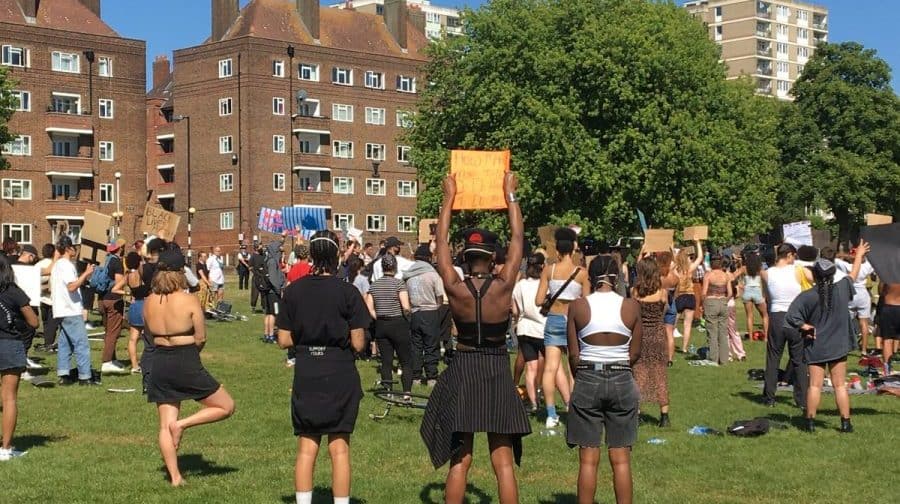 Black Lives Matter protest in Peckham, on May 30. The movement has renewed attention on diversity and public trust in the Met. Credit: Katy Griffith

Southwark Police has been unable to confirm  the exact number of black police officers and their rank working in the borough, or share data from public opinion polling, despite ‘years’ of questioning by Harriet Harman. The Camberwell and Peckham MP, and chair of the House of Commons’ human rights committee, called on the borough commander to take immediate action to share full data on the number of black officers at every level, and explain how opinion polls were being conducted.

She argued that the radio silence from the force over her repeated requests was ‘inexplicable’.

Currently, details on the ethnic make-up of the force and diversity at every level of seniority are only available for the Met as a whole and not borough-by-borough.

In her letter to the Southwark and Lambeth commander, Chief Superintendent Colin Wingrove, Harman said without receiving these figures it will be ‘impossible’ to monitor progress in both staffing and community relations amid ongoing Black Lives Matter protests.

Black people in the UK are nine times more likely to be stopped and searched than white people. Harman believes this will continue until the Met has more diversity among its ranks including at the highest levels.

She suggests focusing opinion polls on young black men aged fifteen to 25 living in Southwark to get a clear picture of the scale of the problem.

Available government data show that at the end of March 2019, across 43 police forces in England and Wales, 93.1 per cent of police officers were ‘white’, with just 6.9 per cent from other ethnic groups.

Four per cent of ‘senior officers’ were from Asian, black, ‘mixed’ or ‘other’ backgrounds.

Last year the Met recorded the highest number of officers from BAME backgrounds – fifteen per cent.

But the majority of these were not from black backgrounds, who account for just 3.5 per cent of officers.

Across the force as a whole, the percentage of officers who are black has increased from 1.1 per cent to 1.2 per cent in twelve years despite recruitment drives. A starting salary for an officer is around £30,000.

More than 60 per cent of people living in Southwark are from black or other minority backgrounds. Harman says one primary school teacher from Peckham told her that by the end of year six pupils are already beginning to lose faith in the police.

“For decades the police have been promising that they would increase the number of black officers, but progress has been pitifully slow and we need to be sure not only that there are more black police officers but that they are serving at every level of seniority,” Harman explained.

“There is absolutely no justification for keeping this information secret. This is public money being spent on a public service and the public are entitled to know. The police won’t be able to face up to the depth of the problem of their relationship with the black community unless they do proper polling and get a benchmark in order to be able to measure progress year on year.”

Chief Superintendent  Wingrove told the News that although full data on police officer diversity is published for the Met as a whole, more detailed information at basic command unit level (i.e. for Southwark and Lambeth) was simply not yet fully available. He denied his unit was ‘refusing’ to hand over the statistics, saying more detailed information would be shared as soon as possible.

Independent surveys into public confidence, at borough level, were conducted on a quarterly basis, he confirmed, along with regular surveys of victims of crime, with data recorded by ethnicity.