‘You are not alone’: Southwark Cathedral hosts service for survivors and victims of London Bridge attack

Survivors of the attack, the families and friends of those who lost their lives, representatives of the emergency services and key political figures attended the Service of Hope 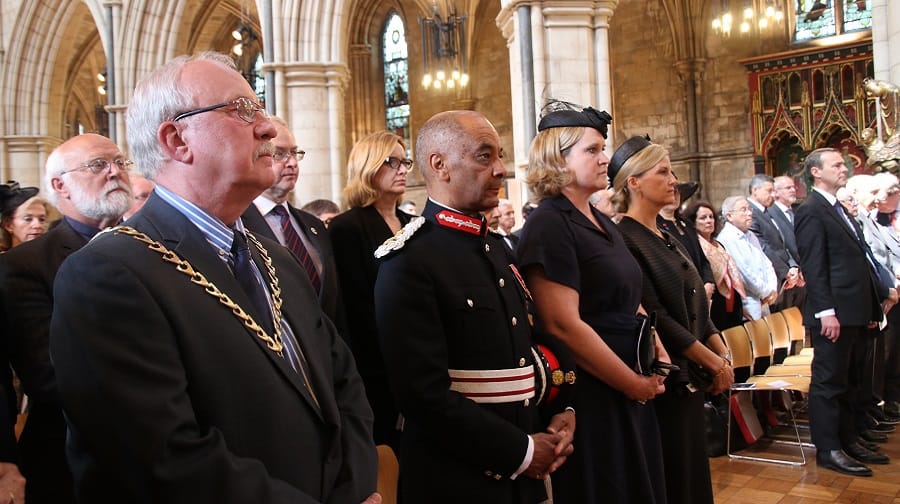 The bells of Southwark Cathedral rang out defiantly as people flooded inside to remember all those caught up in the London Bridge terror attack.

Survivors of the attack, the families and friends of the eight people who lost their lives, representatives of the emergency services and key political figures took their seats inside the packed cathedral this afternoon.

Welcoming the congregation gathered before him, the Dean of Southwark, the Very Reverend Andrew Nunn, told those affected by the horrific attack “our love is for you”.

“Those of you who are the families of the injured and those of you who lost loved ones in the horror of that Saturday night, our love is for you,” he said.

“Today we remember in particular those who lost their lives, their families and friends, and all those who were injured.

“We give thanks for all who first responded to the call, for bravery in the face of great danger, for the speed of their response that brought the attack to so swift an end and for the vigilance and dedication of the police and security services.”

Among those in the congregation were the Countess of Wessex, the Lord Lieutenant of Greater London, the Deputy Lieutenant for Southwark, Met Commissioner Cressida Dick, Mayor of London Sadiq Khan, Home Secretary Amber Rudd, the Cardinal Archbishop of Westminster His Eminence Vincent Nichols, and Mayor of Southwark Charlie Smith.

The Mayor of London read the first reading of the service, while Inspector Jim Cole, one of the first responders on the night, read the second reading.

Eight candles were lit – one for each victim – by children from The Cathedral School of St Saviour and St Mary Overie while representatives of the faith communities gathered around.

In a moving sermon, the Archbishop of Canterbury told those affected by the terror attack “you are not alone”.

“The impact of that violence remains,” he said. “It is found in the memories and the grief of so many in this cathedral, in the marks on doors and walls and pavements and roads, in the pain of those in hospitals and the terrible loss suffered by those who are family and friends of the killed.

“To you who suffered and who suffer today, we say that we weep with you, our hearts are broken by your pain and agony.

“We do not have adequate words or ability to lift from you the great burden but we will walk alongside you sharing it.”

A public service is expected to take place at the cathedral next Friday, June 23, but the details are yet to be finalised.