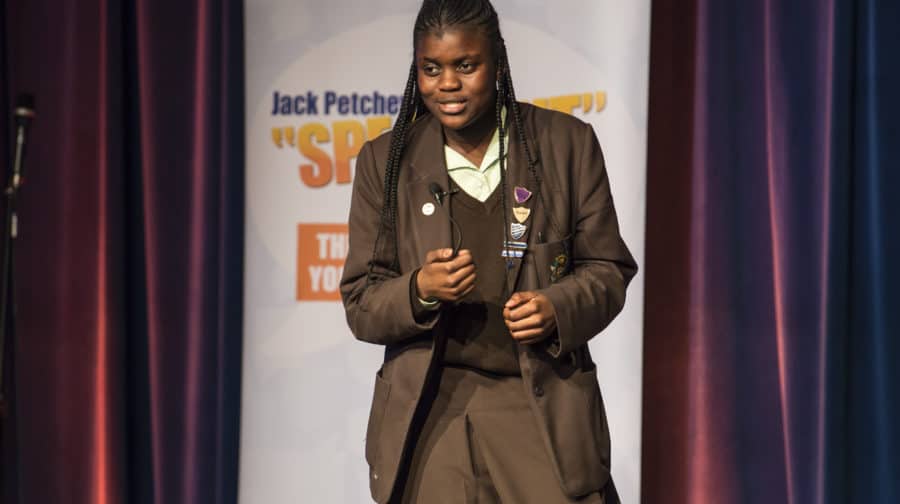 A student from Notre Dame Secondary School won the Southwark regional final of Jack Petchey’s ‘Speak Out’ Challenge last night with a blistering social commentary on mainstream education and its parallels with imprisonment.

Josephine Ayodele, from Notre Dame Roman Catholic Secondary Girls’ School, was crowned winner of the regional final of the annual event, beating 700 other competitors with an impassioned speech calling for more freedom in the classroom.

In her prize-winning talk, she took to the stage asking: “What is the difference between a prison and a school? Because right know I am finding it hard to tell the difference.”

Stuck behind bars or in a classroom, wearing uniform, and unable to vote, there certainly are similarities between the two groups.

“How do you expect us to find ourselves when you lock us up in cells like this?” she asked.

Josephine was then greeted with rapturous applause as she said the petty ‘please miss’ and ‘yes sirs’ of day-to-day schooling left everyone worse off.

“I’m so, so, so sorry that my bladder has a mind of its own’ she said, laughing about being told when she can and can’t go to the toilet.

But she concluded her speech on a serious note, saying both teachers and prison guards ‘work your socks off’ and don’t get paid enough for their vital work, and claimed the problems faced by both institutions are created by society as a whole.

“When I’m prime minister in the future I will not allow students to be in chains, but will prepare them to be the free leaders of tomorrow, because you can’t reach for your potential from within a prison cell,” she vowed.

Speak Out sees 19,000 students from all over London and Essex take part in one day public speaking training workshop before entering public speaking competition, giving a talk on a topic important to them.

Organised by the Jack Petchey Foundation and the Speakers Trust, a public speaking charity, the final was held on Wednesday, March 20, at Peckham’s Harris Academy.

Second place went to Sacred Heart Catholic School student Eden Ehioghae with a talk entitled ‘it’s not where you go, it’s how you get there’, with UAE Southbank’s Angel Opon-Ntim coming in third with ‘the little things’.

Josephine said: “I’m really grateful for this opportunity and so happy to be able to voice my opinion. It is an experience I will never forget.”

Hopefully her Elephant and Castle secondary teachers aren’t too offended…