Young male cheetah climbed out of enclosure, but was tempted back in with a chicken 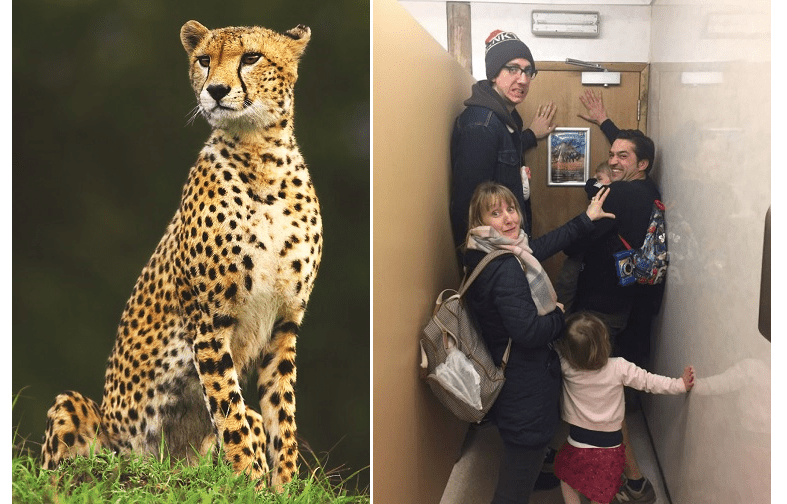 A Nunhead woman has recalled a “bizarre” trip to a Kent safari park, which ended with her and her partner hiding in public toilets from an escaped cheetah.

It was nearing the end of an enjoyable day at the Port Lympne Wild Animal Park when Alice Stittle, her partner, and their two friends’ were returning to the car park.

“We actually thought everything was fine. We had been watching the monkeys get fed and were walking towards the exit, past the rhinos,” said Alice, 33.

Then out of nowhere came a zoo keeper yelling at everyone to “grab your kids now”.

“I thought they were just making a big deal of getting us out of the park,” she said, but it turned out one of the park’s cheetahs had escaped its enclosure, and was on the prowl.

“The nearest place to run to was the toilets.

“We all just suddenly ran to the ladies’ loos.

“It was bizarre. We didn’t really register what was going on and then we all looked at each other.

“The kids thought it was the most exciting thing.

“We kept poking our heads out of the toilet and there were people in the disabled toilets hiding.”

A statement from Port Lympne has estimated the young male cheetah, named Kitwana, was on the loose for 25 minutes, but was teased to its enclosure with a chicken.

When staff gave the all-clear, Alice said she saw “all these other people emerging” out of other toilets and places around the park.

“It was just the strangest experience, but we had a really fun day anyway,” the freelance journalist added.

The photo Alice provided to the News was one she had posted on Twitter while they were hiding in the loos.

The next morning, she said her Twitter account was filled with newspapers asking her to recount the experience.

A statement published on the zoo’s website by animal director Adrian Harland said: “The cheetah was calm and pacing the enclosure fence looking to get back in.

“Some food was thrown into the enclosure and the cheetah walked back in to get it. No vet intervention was needed.

“He only climbed out to get back with his mother after having been separated to stop him eating all her dinner. We have secured the enclosures perimeter fencing to ensure that the cheetah cannot climb out again.”

There are many more amazing videos and articles, completely free on: https://top100wonders.com
You can also receive them in your feed by “liking” the FB page: https://www.facebook.com/Top100Wonders

Books are available on Amazon: https://www.amazon.com/Top-100-Wonders-World-Beyond-ebook/dp/B06XG7KLYK/ref=asap_bc?ie=UTF8