Duo from Nunhead use Japanese techniques to custom-make knives made from charcoal and coke (degassed coal). 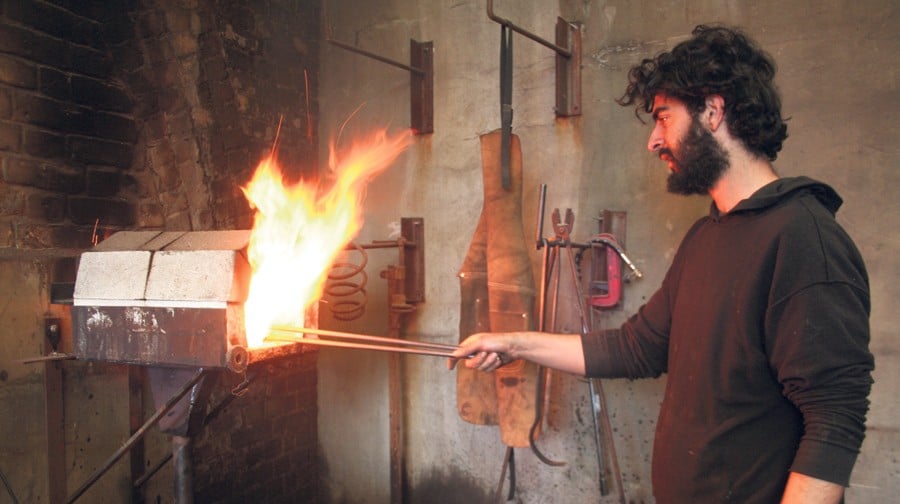 Jon at work on the forge under the arches of Peckham Rye Station. INSET; knives made by Blenheim Forge

SPARKS are flying at Peckham Rye station but it’s not the train tracks that are grinding us down – under the arches two friends are forging an unusual career.

Jon Ross-Harris and James Warshawsky, from Nunhead, are playing with fire under the station in Dovetail Court but it isn’t a cause for concern – they custom-make knives ranging from £80 to £400.

Before the pair moved into Blenheim Grove they had been working in their gardens and experimenting, but now they supply chef knives to customers James said: “It’s a unique forge that we made ourselves.

It’s made of charcoal and coke (degassed coal). We’re both inspired by Japanese techniques. I used to be a sushi chef and we were both quite interested in it – then we just started experimenting.

“The way we started we didn’t shout about it because we were working so slowly. But it’s growing quite naturally.”

“We did the Pexmas market but we didn’t sell much. People go out with a fiver to buy a brownie, not to buy expensive knives! “Looking back, the methods we used were insane!”

The demand for the knives has so far mainly been Peckham based but some interest from overseas has taken them by surprise.

“It’s mostly local but we’re getting some odd emails from strange places, even as far as America, and we posted one over.” Jon says that being part of the Peckham community has been invaluable to them getting their trade off the ground.

“We’ve made some friends locally and they’ve brought us some wood which we use for the handles.”

Some of the wood comes from nearby Nunhead cemetery, which the boys’ craft themselves along with the blades and customers often return following a purchase for a lesson on care for their knife.

“Being in Peckham makes a big difference”, says Jon. “There are lots of small businesses around who are extremely supportive. People just want to help – they don’t want anything out of it.”