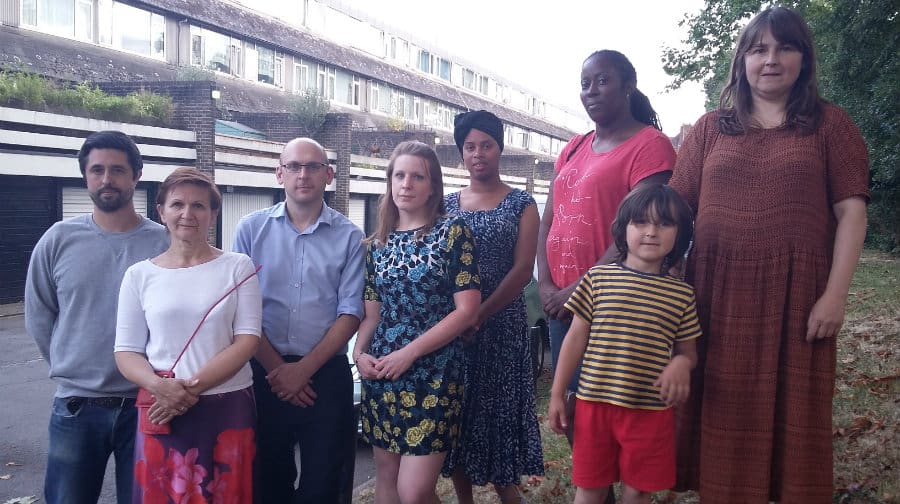 Nunhead families have been landed with £46,000 roof-repair bills by Southwark Council, forcing some to look at leaving the area for good.

Residents in Limes Walk, a block of 1970s council flats, have been embroiled in the ongoing dispute with the council since 2014.

The council insist leaseholders pay between £44,000 to £46,000 each, to replace the flat roofs that stretches across the two-block estate with 42 flats. But residents told the News they have been left with no choice but to challenge the council in a tribunal. They have also been prevented from scrutinising the details of their “extortionate” deal the council has reached with contractors A&E Elkins Ltd.

Alastair Kenward, 42, who lives with his wife and son, said: “They have given us no help with anything and they are being completely un-transparent.

“We asked [the council] for the specs so we could try and find a better quote somewhere else and they just gave us eight little details. We took the specs to a scaffolder and we were told it wasn’t enough information. So the council are effectively stopping us from trying to find another price.

“They said they put the job out to tender and that this was the best of five deals they could find. We asked them to show us these quotes, but the council refused because it’s sensitive information. They aren’t giving us any way of checking any of it. They expect us all just put up with it and pay a ridiculous amount.”

Meanwhile, his partner Hatty Lee, 47, said other leaseholders could be forced to sell if they can’t foot the bills.

“Some people want to move away,” she said, “but they’re stuck because whoever they sell to is going to have to pick up the bill, and are feeling pressured into asking for a much lower asking price. And the people who sell won’t be able to find anything they can afford in this area.”

Dawnete, a mother of five, said: “It’s not right at all what they are doing. People have budgeted an exact amount that they need to live on. We can’t suddenly be expected to pay a huge bill like this. I’m going to have to try and move to somewhere like Bromley.”

Mariana Dodig, treasurer of the Limes Walk Estate T&RA, who has been a leaseholder for ten years, said: “You look around the internet and see stories like these, and it looks like this estimated fee is more likely to be an underestimate than an overestimate.

“We could well be billed for more in the end. We really wonder why the roof could not have been maintained with work here and there over the years, rather than waiting for it to get really bad.”

Councillor Peter John, leader of Southwark Council, said: “The council has consulted extensively with residents of Limes Walk about these proposed works, which are essential for the safety and maintenance of the building.

“We understand how important it is for the council to demonstrate that our chosen contractors are providing value for money and we will be meeting with Limes Walk residents in the near future to talk through the details of this tender and to discuss their concerns.”