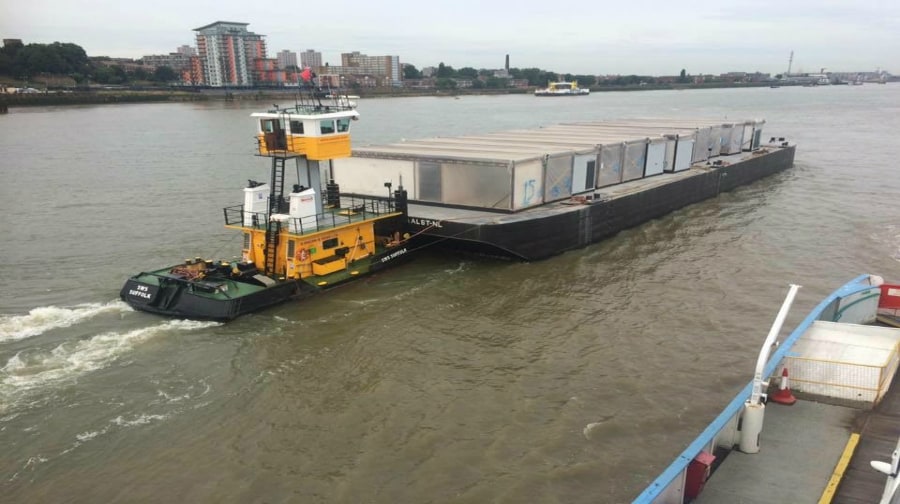 Offices with river views are the envy of many workers in London, but maybe none more than these – which are actually floating on the Thames, writes Thomas Deacon…

Over the next three weeks almost 100 office units will be floating up the Thames to Chambers Wharf in Bermondsey to set up base for construction of the eastern section of the Thames Tideway Tunnel.

The 96 cabins will float along for 22 nautical miles up the Thames from Tilbury as part of the biggest infrastructure project by the water industry, and also one of the most controversial.

Tideway’s delivery manager for the east section Jackie Roe said: “This is our first major delivery to Chambers Wharf and underlines our commitment to use the river to transport as much as we can, so we can keep lorries off London’s road and help revitalise the river economy.”

Tideway has been set with the task of delivering the new 25km long sewerage tunnel to help tackle untreated sewage flowing into the Thames.

The scheme has not been without controversy, with tunnelling work due to start in 2018. Various campaign groups sprung up to halt the project, with fears of constant noise, vibration and debris caused by huge boring machines running 24-hours a day.

Four thousand workers will descend along the route’s 24 construction sites which includes five shafts leading down to the tunnel.

Dubbed the ‘super-sewer’, the cost of the £4.2 billion project will be borne by residents with a surcharge rising to around £25.

The first set of units were delivered by local barge firm S Walsh on Monday, and a total of 60 cabins will be at the site by the end of the week.

Fewer units are expected to be delivered next week, with high tides hampering efforts. Chambers Wharf, on the Bermondsey riverside, marks the starting point of the east section of the tunnel which will run to Stratford.