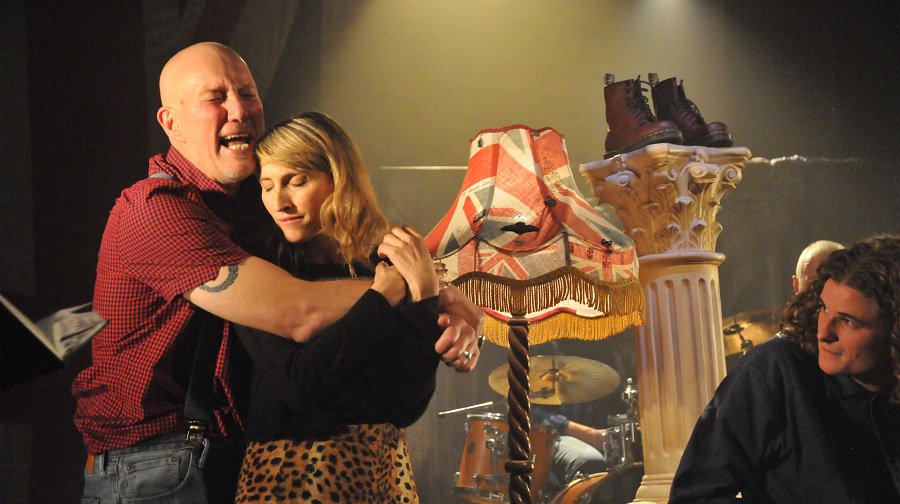 Oxblood Red, on show at the Union Theatre on November 6. Photo by Martyn Bullock

A bunch of mates from the famous Fitzroy Lodge boxing gym have returned triumphant after two nights at the Union Theatre, performing their very own rock opera.

Bermondsey man Chris Terrill said his cast swapped sparring for singing and dancing with performances of their first production, ‘Oxblood Red’, with sold out shows on November 5 and 6.

Director Chris Terrill told the News: “There’s six of us in the cast, including two women.

“Everyone performing is a boxer and usually we just meet up and hit each other. But from that has come the most wonderful friendship.

“We realised that between us we can play guitar and sing and do bits and pieces. So we just started writing and meeting up and it’s grown organically.”

The plot for Oxblood Red – named after a popular choice of colour of Dr Marten’s boots – follows the life of Terry Swan, an old skinhead on the brink of turning 60.

Terry’s life is a mess after losing touch with his kids and getting divorced from his wife.

He seeks to relive his misspent youth in the 1970s, and takes a trip to the old East End and Canary Wharf, and he sees how much it’s changed.

“The play is about Terry on his walk, and you’re never quite sure if you’re with him in real life or if he’s in a dream,” said Chris, 65.

“You feel every emotion under the sun. You’ll be crying with laughter and with sadness when it ends.”

The production was written by Glenn Charles, one of the boxers, who is himself a former skinhead, and works as a probation officer in Southwark. Also in the cast, the group’s drummer is a barrister, and another member is a stockbroker.

“We’re a real cross section of people,” Chris said. “It’s a consequence of the bonding which you feel together as boxers.

“There’s a curious bond of honour and respect between people who get into the ring together. And that manifested itself in this piece of work.

“We’re not punting to be the next big thing in theatre, but it’s a wonderful experiment, and an example of the democracy of live theatre.”