"The busy and noisy environment of a property on the Old Kent Road is no place for a wild animal," said an animal rights charity 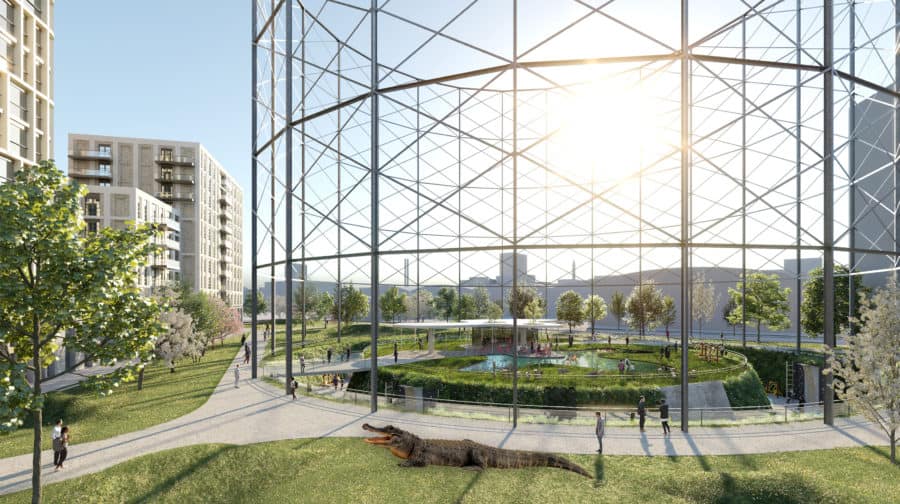 But Avanton admits it has not met with Southwark Council to discuss whether its bold idea could ever be allowed – and an animal rights charity has slammed the proposal as alligator “exploitation.”

The idea is for a Victorian gasholder to be transformed, to house alligators in water features going 20m deep.

The frame of the gasholder would be shielded in special glass conservatory to create a ‘Florida-like’ environment for the animals.

The alligator park would then be a tourist attraction at the centre of the £230m mixed-use development including housing and offices.

It’s one of three ideas for the gasholder, said Marc Pennick, the developer’s co-founding director. “The Alligator Park and Farm would be the first in London, and is one of a series of exciting leisure concepts Avanton is reviewing for the vast Grade II listed gasholder on the Gasworks site on Old Kent Road,” he said.

“We want to turn the gasholder into something really special for London, so alongside the Alligator Park we are also looking at the option of turning it into a large lido and leisure deck complex, and are also thinking about an artistic garden with water features.

“The Alligator Park and Farm concept came to us after we were approached by an out-of-town specialist looking for a location for an Alligator Park in the capital.”

But animal welfare charity, World Animal Protection, said it was “extremely concerned” by the idea. “Alligators are wild animals that should be in their natural environment and not as part of an attraction at a property development,” said Katheryn Wise, the charity’s campaign manager.

“Not only is the busy and noisy environment of a property on the Old Kent Road no place for a wild animal, the transportation and handling of these alligators is likely to cause them unnecessary stress, fear and anxiety.

“Wild animal exploitation to boost the profits of a property developer is the wrong message to be sending and we are urging the company to rethink their decision.”

However, Avanton said it would only go ahead with the idea after consulting animal welfare experts.

Councillors have also reacted with bemusement at the left-field plan.

“I am however glad to say that it won’t be happening,” said Cllr Richard Livingstone, an Old Kent Road ward councillor who also holds the environment portfolio for Southwark.

“I like alligators – but in the swamps of Louisiana and Florida, not on the Old Kent Road!”