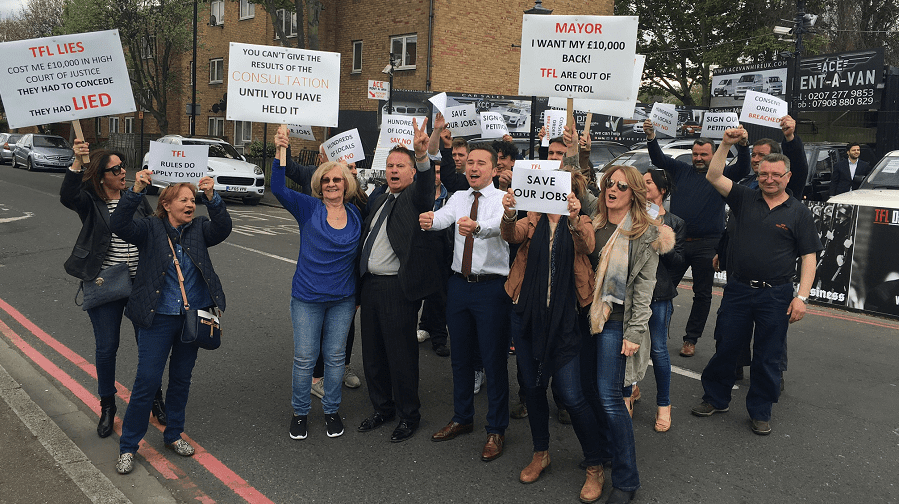 A car company near the Old Kent Road staged an anti-TfL demonstration on Tuesday in protest of proposed double red lines being put down outside their business, writes Alex Yeates…

Kent Carriage Company displayed banners and was joined by over 35 people holding placards and chanting as they blocked Pomeroy Street for fifteen minutes with three of their cars.

The company’s owners believe that if TfL puts down the double red lines it will drive business away.

Paul Houston, the owner, said: “This protest is about the message going back to TfL that the consultation has already been decided and that it is not right. They just need to listen to us.

“To see everyone here feels like we are finally getting our point across. It’s feels good. It has been very stressful and we don’t need it.

“It is great to be joined by our family and people from local businesses.”

The short protest attracted much attention as a long line of cars up the Old Kent Road quickly formed with the sounds of horns filling the air.

TfL have said that they are yet to begin the consultation period for the proposed double red lines and that they are for the smooth running of the junction.

Nigel Hardy, Head of Sponsorship and Surface Transport at TfL, said: “No decision has been made on proposed changes at this junction. We’ve been engaging with Kent Carriage Company for some time and we will hold a consultation into proposed safety improvements later this year.”