The court heard Khan, aged 23, had been sending bulk messages to drug users in Kent offering them heroin and crack cocaine 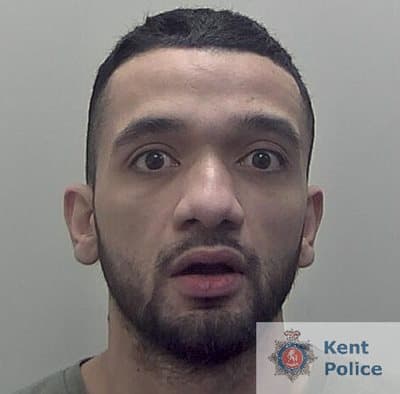 Old Kent Road's Amir Khan (pictured) was "happy to make money out of the suffering of others", said police

An Old Kent Road drug dealer who supplied heroin and crack cocaine to people in Canterbury has been jailed.

The dealer has been jailed for six years and two months following a Kent Police investigation into a county-line drug operation from Woolwich into Canterbury.

A ‘county-line’ is where a mobile number is used for marketing of drugs, often run by criminal gangs in London, but using runners to deliver to customers outside of the capital.

The court heard that telephone data revealed that Khan had been sending bulk messages to Kent drug users offering to sell them heroin and crack, regularly travelling into east Kent to deliver the drugs.

Police uncovered the operation when they searched a Ford Fiesta parked in Canterbury – only to discover 16 wraps of crack cocaine and 41 wraps of heroin in a metal tub.

Mobile phone data showed Khan had travelled to Ramsgate, also in Kent, to meet with the car’s owner, and that he was in Kent when the car was searched on October 24.

The 23-year-old was later arrested for his crimes on Woolwich’s Plumstead High Street in January.

Despite not commenting in police interviews, he admitted the offences in court.

He was sentenced on Monday, March 18.

Investigating officer DC Peter Frampton, of Kent Police, said Khan was “happy to make money out of the suffering of others.”

“I hope this jail sentence serves as a timely reminder of just how seriously the police and courts take county-lines drug activity,” DC Frampton added.