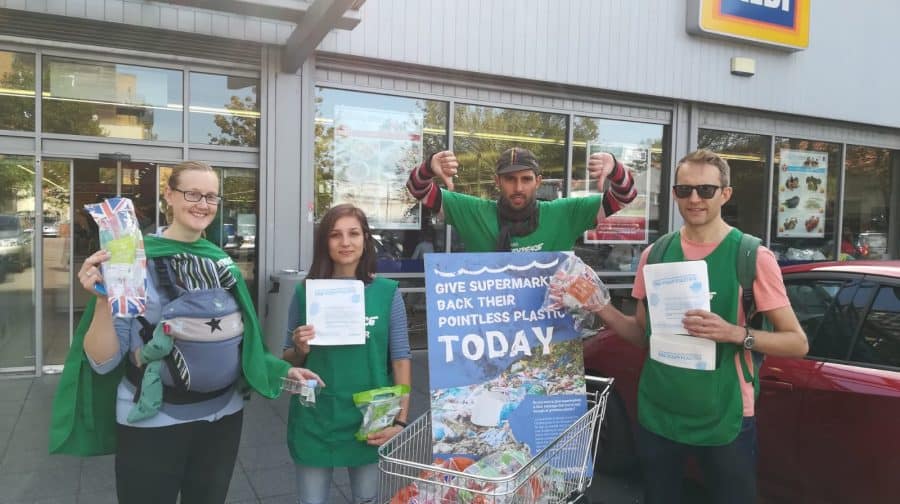 Shoppers at supermarkets on the Old Kent Road have been handing back single-use plastics to the stores – with notes for managers to do more on plastic waste.

Greenpeace volunteers staged the stunt on Saturday (September 15) to encourage big brands to reduce their plastic footprints and to eliminate non-recyclable plastic packaging by 2019.

Campaigners visited the Asda and Aldi on the Old Kent Road as well as another sixty shops across the country as part of their green efforts.

Francesco, a volunteer with Southwark Greenpeace, said: “It is profoundly shocking to see Aldi and Asda selling groceries packaged in single-use plastic.

“It is widely known that plastic is killing animal species all over the world and, what’s more, wrapping bananas or avocados in single-use plastic is absolutely pointless.

He added: “Fruit already has its own wrapper: the skin! Supermarkets should be in the front-line against unnecessary waste.”

Elena Polisano, an Oceans Campaigner at Greenpeace said: “Supermarkets selling masses of throwaway plastic packaging should be making great strides to stop their plastic from clogging up our oceans.

“Major grocery retailers have a huge role to play in cutting the overall amount of throwaway plastic being produced, making sure unnecessary and non-recyclable plastics are off the shelves by 2019, and switching to truly sustainable solutions.

UK supermarkets generate more than 800,000 tonnes of plastic packaging waste every year and Greenpeace is calling for shoppers to leave their plastics at the check-out for the company to deal with.

Over 650,000 people across the UK have signed a petition asking for supermarkets to reduce their throwaway plastics, while Greenpeace conducts a survey on the amount of plastics shops use.