The building would allow community and social mobility programmes to take place on-site, the theatre hopes 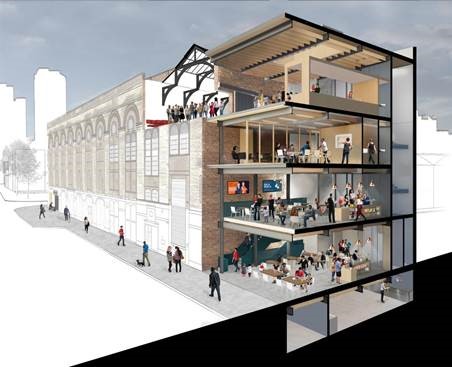 An artist's impression how the Annex would look (Image: Old Vic)

The Old Vic theatre has proposed creating a £12m ‘Annex’ to open up theatre opportunities to the local community in partnership with Southwark and Lambeth councils.

The proposal is for a funding arrangement which would see the two boroughs loan the theatre around £3.75m each towards the £12m total.

Southwark’s town hall officials are due to consider the loan on Tuesday (July 16) while Lambeth will discuss a similar loan on July 22.

The new five-storey space would solve problems with lack of on-site space, allowing programmes which target schools and the local community to take place closer to home, the theatre said.

“Southwark has a long-standing and positive relationship with The Old Vic, which has helped many young people in Southwark gain unique and valuable insight into the world of theatre,” said Cllr Rebecca Lury, cabinet member for culture.

“This exciting arrangement with The Old Vic is just one part of this; delivering jobs, skills and training for our young people, and opening up the world of culture to a wider and more diverse group of people.”

The Annex will include a ‘learning centre’ for nearby schools and colleges, a library of plays freely available and back of house space for The Old Vic’s staff and companies.

The extension would double the amount of people benefitting from the institution’s community outreach and educational work, it hopes.

It would also drive more people to attend an on-site café, the theatre said, meaning more revenue streams for the institution.

It would be a “once in a generation” opportunity for the theatre and the area, said Old Vic Executive Director, Kate Varah.

Under the terms of the loans, yet to be greenlit, the Old Vic would fundraise to repay the loan over a 10-year period through philanthropic support.