The Marlborough Sports Garden will be open to schools, residents and workers in the area 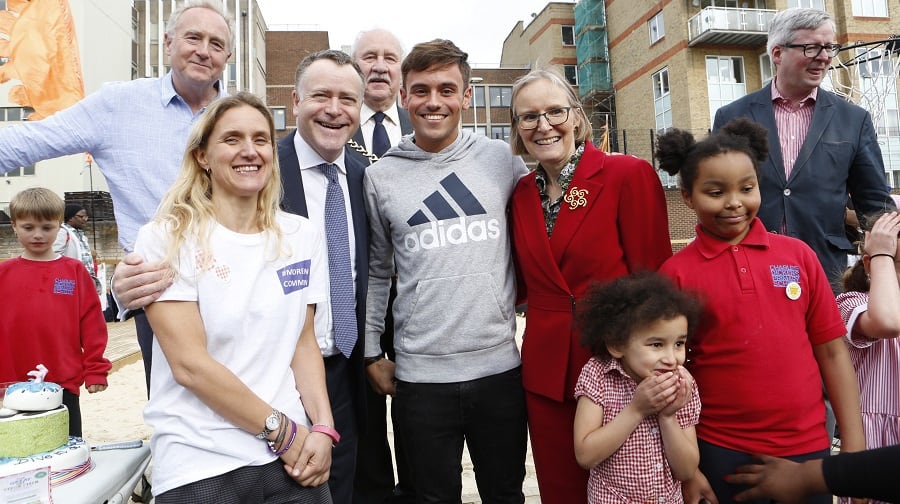 The two-acre Marlborough Sports Garden, in Union Street, will offer numerous sports pitches and facilities for a wide variety of games including table tennis, beach volley ball, basketball and football.

Managed by charity Bankside Open Spaces Trust (BOST), the Marlborough Sports Garden will be available to pupils at eight schools in the area who have little or no facilities for outdoor sport.

It will also be free for local people and activities during the day will include events for office workers, women and girls, older people and people with disabilities. Olympic diver Tom Daley played along with the Pandemonium Drummers who performed at the opening ceremony of the London Olympic Games (Agnese Sanvito)Tom Daley, who officially opened the centre on Wednesday, said: “This area of London doesn’t have much outdoor space so I am delighted to see this new sporting facility up and running and hope local school children get a huge amount of use and enjoyment from it.

“It’s really important that young people have places like this to play and exercise in.

“Well done BOST for redeveloping the Marlborough Sports Garden and providing this fantastic space for everyone.”

Chairman of BOST Tim Wood added: “Southwark has one of the largest percentages of child obesity in the UK.

“We hope this facility – which is within walking distance of local schools – will enable them to offer their pupils vastly improved sports opportunities. “We want to make it easier for everyone living here to try sports by providing a wide range of activities, and increasing the number of people engaging in physical activity in the open air.”

Kim Leadbeater, sister of the late Jo Cox and ambassador for the Jo Cox Foundation, who herself is an aerobics instructor, was also at the official opening alongside parents Jean and Gordon Leadbeater to promote the nationwide initiative The Great Get Together.

One of the biggest of these events in the country will be taking place at the Marlborough Sports Garden and surrounding streets of Bankside on June 24.

The redevelopment of the Marlborough Sports Garden was made possible by funding from Southwark Council, London Marathon Charitable Trust, The Worshipful Company of Tallow Chandlers, Team London Bridge, and others.

The centre was named after Consuelo, Duchess of Marlborough, who donated the Marlborough Sports Garden’s two acres of land – previously unsanitary slums – to the people of Southwark.