'It has been a long and challenging journey, but it seems the sacrifices made along the way have all been worthwhile' 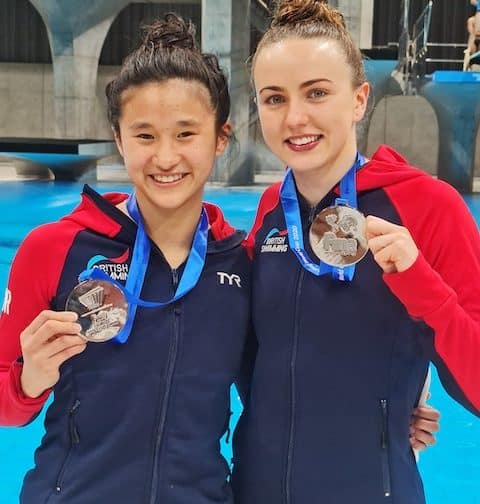 An Alleyn’s sixth-former will represent Great Britain at the Tokyo Olympics in July.

Diver Eden Cheng earned her first major medal in 2018 at just fifteen when she won gold at the European Championships in the 10 metre Platform Synchro with partner Lois Toulson.

She will now compete at the international games while studying for A levels in Maths, Biology and PE.

The pair hope to follow their latest win – a silver medal at the 10m Synchro at the FINA Diving World Cup.

Eden said: “It’s been so exciting to have competed on the world stage once again and winning a silver medal.

“However, the best part of it all was being able to secure an Olympic quota spot for Team GB.

“It has been a long and challenging journey, but it seems the sacrifices made along the way have all been worthwhile. Thank you, Alleyn’s for the support you have given me through all these years.”

Gavin English, director of sport at Alleyn’s, said: “This is a remarkable achievement in any context but that Eden has accomplished this while continuing to engage in the broader life of the school and rigorous academic study shows just what can be achieved with truly determined effort.

“Her silver medal and selection to the Tokyo team is of course phenomenal but Eden’s journey and the commitment she has shown along the way are simply awe inspiring.”

Alleyn’s head, Jane Lunnon, while conceding that it may not be as exciting as Tokyo, has nevertheless humbly invited Eden to sign the head’s ‘Book for Outstanding Achievement’.