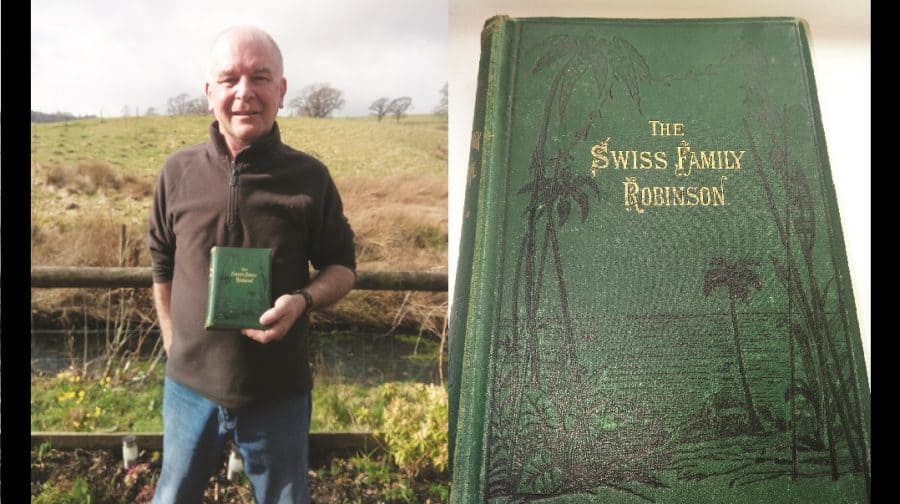 A book given to a Peckham schoolboy in 1883 has been discovered in the Lake District and now its new owner is looking to trace its history.

David Wood, Cumbria resident and current custodian of the book, is hoping the News and its readers can help him find out more about the novel’s original owner and even locate his descendants.

“I really want to try and track the relatives down. I’m on a one man crusade!” he said. “That book is history looking right at me!”

The 1878 edition of The Swiss Family Robinson, which David got from a friend after a house clear-out in autumn last year, comes complete with clues in an inscription.

It was given to a standard (year) four boy called Bery Hill in Midsummer 1883, for being “first boy in the class” and for “good conduct.”

Inscription gives us clues about the book’s origins in Peckham

He was given it by his school, which was called Wesleyan Middle Class School in Peckham. It no longer exists but was on Stafford Street. It opened in 1834, changed name to Stafford Street Temporary School in 1923 and closed in 1929.

It is also believed, due to the “Wesleyan” name, to have been linked to the Methodist church, with John Wesley being the founder of the church.

“As soon as I got the book, I got in touch with Phillip Serrell [an auctioneer who has appeared on daytime BBC show Bargain Hunt]. He told me it was definitely a first edition but not worth very much, because there are a lot of them around,” said the 61-year-old.

“Anyway, I don’t want to sell it. I want to try and track down the living relatives,” he said. “This is family history.”

Who was Bery Hill?

David described how his motivation for finding the book’s roots comes because “quite simply, history is so quickly forgotten.”

“We don’t realise half the time what’s gone before us. We’ve become quite insular. Who knows – maybe he [Bery Hill] could have gone on to do something great in his life” “But who knows – maybe he was someone who just lived down the road!”

If you think you or someone else may be related to Bery Hill – or know someone who may have gone to school with him – contact the Southwark News newsdesk on 020 7231 5258 or at: editorial@southwarknews.co.uk