A three-car collision came just months after a woman was killed in the dangerous road. 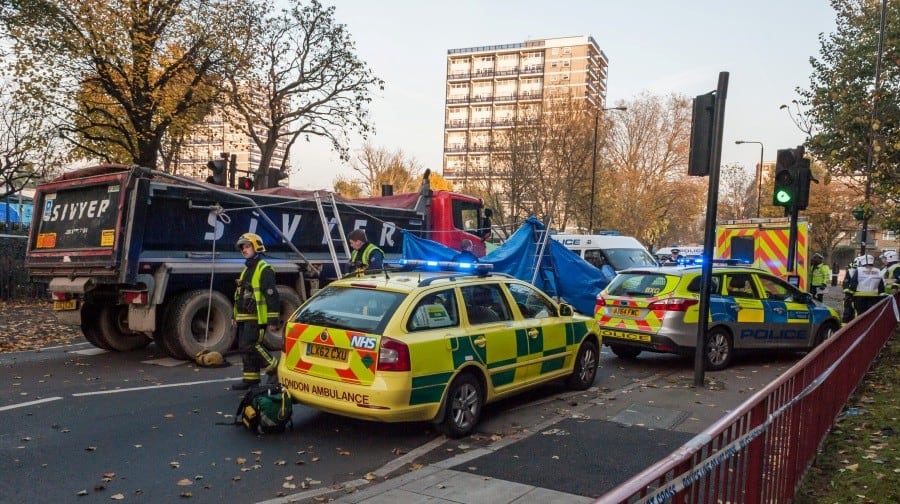 The scene of the accident last November.

A Rotherhithe resident fears it is “only a matter of time” before another tragic accident occurs in Rotherhithe New Road, following a three-car collision last Friday.

The incident came just months after an elderly woman was crushed to death by a tipper lorry in the same section of road, a gruesome incident that shocked residents, including Silverlock Estate tenant Karen Connolly.

Karen lives in a flat overlooking the road and believes the problem is due to the close proximity of the roundabout exit and the pedestrian crossing.

She said: “Buses and large lorries are too big to fit and need to swing out. Buses collide, trucks clip each other, and that poor woman died last year. All you hear is squealing brakes. There’s not enough time to react and it just isn’t safe.

“People are scared to cross at that pedestrian crossing – old people, young kids, mothers with babies. It’s only a matter of time before someone is killed again.”

Karen and her mother cross the dangerous pedestrian crossing.

A police spokesperson said that a man was arrested on suspicion of driving drunk following the most recent collision. No serious injuries were reported at the scene.

Karen witnessed the aftermath of the tragic accident last November when an elderly woman was killed.

Karen said: “It shouldn’t have happened and something needs to be done.”

A man was arrested at the scene on suspicion of causing death by dangerous driving. He has not been charged and is on police bail until mid-April.

Councillor Mark Williams, Southwark’s cabinet member for regeneration, planning and transport, said: “I am saddened to learn of last week’s collision. While works were carried out last year to improve road safety at the Rotherhithe New Road roundabout, we’ll be carrying out an urgent review to see if there’s anything more that can be done to improve matters.”