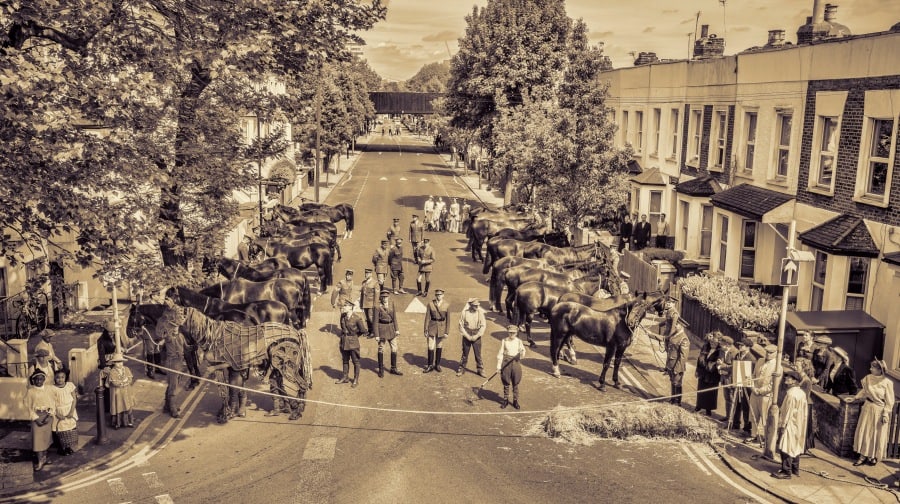 A road was closed off in Peckham on Monday to make way for 30 Household Cavalry horses to recreate a postcard from 1915.

One hundred years ago, Lyndhurst Way (then Lyndhurst Road) was filled with horses from the Royal Field Artillery (Camberwell Division). In preparing the animals for battle, Gordon’s Brewery in Chadwick Road, had been requisitioned as a stable. When the troop was struck down with disease the stables had to be sterilised and the horses temporarily moved out into the street. The striking scene, captured by Rye Lane photographer Frederick Alfred Finch, became a well-known postcard of the time.

When a friend showed the image to artist and social historian Melissa Jo Smith to see if she could recognise her house, the 45-year-old decided to launch a mission to recreate the same scene 100 years on.

Nine months after she started work on the project, Melissa compared the event on Monday to “giving birth.”

“It was a magical feeling,” she added. “It was a bit like stepping off a cliff and hoping something would support you.”

“For the school children, the past has come alive to them,” said Melissa, who thinks it is important to remember the soldiers and animals lost in battle.

“We know so many of them didn’t come back, both the horses and the men, so it’s very moving. It’s a way of connecting with the past,” she added.

As well as the soldiers captured in the original image, stable hands and local residents can be seen gathering on their front door steps or on the pavement by the gun carriages, which went on to be used on the World War One battlefields.

On Monday morning at 11am, shopkeepers in costume were joined by Joey, the National Theatre’s life-size puppet horse from War Horse for the reenactment. The school children involved will now be able to go and see a production of the award-winning play as part of the £11,000 project funded by the Heritage Lottery Fund and the Peckham Society.

An image of the recreation by taken by photographer, Vipul Sangoi, will be free from copyright and “belong to everyone” from the community, according to Melissa.

I’d like to mention that the glossy chestnuts at the back were from the Light Cavalry (HAC) and came all the way from Windsor! http://www.lchac.org.uk