Southwark has already lost around 1,000 trees in just two years. 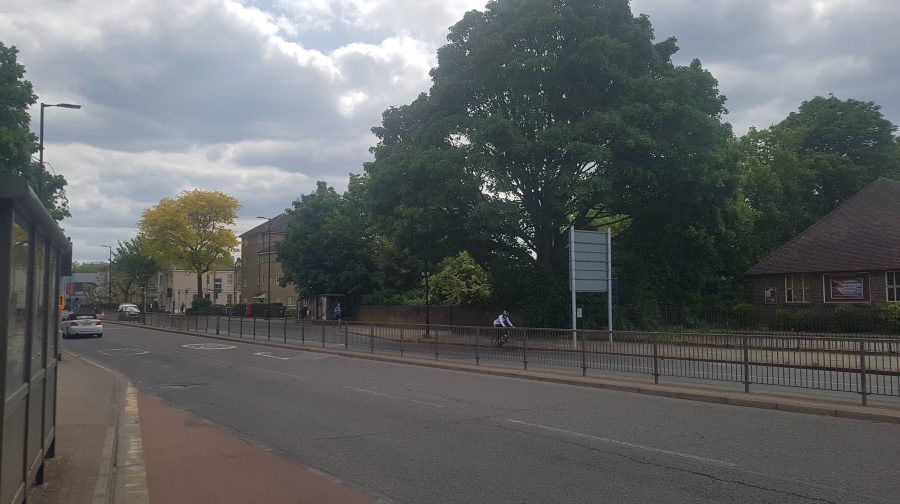 Local residents have complained that cutting down mature trees for a new development will harm people’s physical and mental health, writes Kit Heren…

The new blocks, just off Lower Road in Rotherhithe, will be built on the site of St Olave’s, a former NHS nursing home.

Peabody, a housing association, bought the site in 2018 and gained planning permission for the 62-home development earlier this year.

But locals have spoken out after it emerged that eighteen mature trees on the site will be felled to make way for the new buildings.

Kerry, who lives on Ann Moss Way at the back of the new development and declined to give his last name, said: “The trees we have here are quite old, they’ve been around a long time and they’ve got quite a lot of coverage.

“We’re losing that feeling of nature. It’s really important because of the amount of concrete and artificial things that are in our lives already. It gives us a bit of peace and quiet to have some greenery around. There’s been plenty of research that has shown for the elderly people and vulnerable people trees are very important mentally.”

Several recent studies, including separate papers by researchers in Japan, Australia and Poland, have suggested that being around mature trees with large canopies reduces feelings of anxiety, stress and depression.

Kerry continued: “The other factor is the environmental benefit we get from trees because there’s a very high amount of pollution in this neighbourhood, so we really need trees to have good physical health.”

More than 40 locations in Southwark failed UK air quality targets in 2017, according to data published by Friends of the Earth – including a monitoring point on Lower Road that had nearly double the nitrogen dioxide limit.

Trees can balance some of the air pollution common in cities by taking in and filtering pollutants while also giving out oxygen.

Southwark has lost nearly 1,000 trees since 2018 – despite the council declaring a climate emergency last year. The council has said it will replace the lost trees.

But the difference between mature trees and new replacements is important, residents say.

Steve Cornish, chairman of Friends of Russia Dock Woodland, said: “We’re in deficit… We need an overall baseline of where we were a few years ago with our trees in this area, and where we’re likely to be in the next 10, 15 years.”

Planning documents for the St Olave’s development say that all the trees to be lost are either category B or C, meaning they are of “moderate” or “low” quality.

Developers will plant a further 28 trees, although more than 1,300 cm of stem girth will be lost in total.

Mr Cornish said: “These trees have taken decades to get to this point and to stick a few twigs in the ground, with a little bit of a post round it – as is generally the case – as a replacement is not the answer.”

Kerry added: “What they’re going to replace the current trees with is much smaller saplings.

“A lot of us are realising as we walk around the borough that the amount of mature trees being cut down or pruned back, and the ones that are being removed are being replaced by very small trees of a similar size, so we’re never going to see these old views which we used to have of huge expansive trees.

“It feels like as the buildings are getting bigger, the trees are getting smaller, very much at the same speed. So they’re being dwarfed in the landscape which is such a shame, because they used to have a much stronger visual impact. Now they feel like a bit of adornment and decoration from the developer’s point of view.”

Peabody plans to build 62 new flats on the site across two buildings up to six storeys high. Half will be considered affordable, the minimum recommended by Mayor Sadiq Khan for housing on former public land. Of this, just over a quarter of homes will be socially rented.