'We are not against council housing, what we are against is people coming in ripping the heart, taking our green spaces, taking our children’s play area, building on top of roofs' 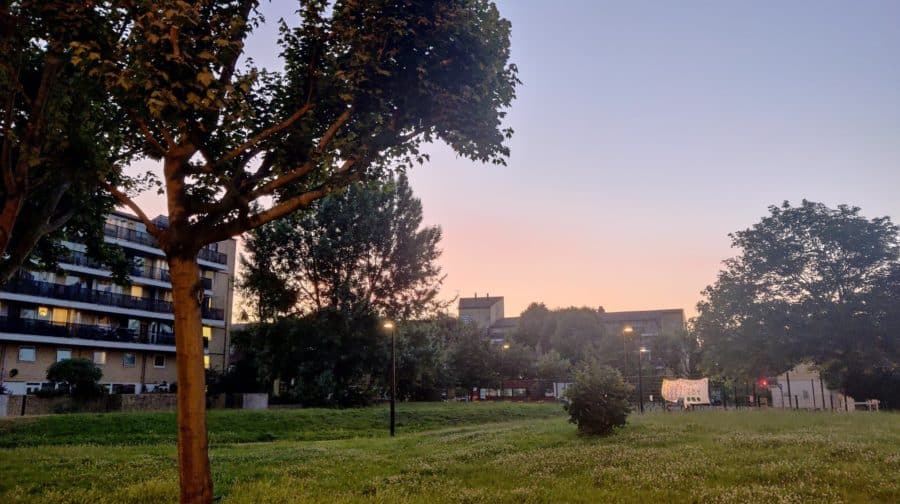 At the meeting, the Labour-run administration also rejected a call from the Liberal Democrats to put the scheme on hold and explore giving formal protections to communal land in estates across Southwark.

Twenty-eight estates in total are earmarked for so-called ‘infill’ homes – new council homes squeezed into communal areas the council claims are either unused or unloved, or can be reconfigured to hold new properties and create improved playgrounds and amenities.

Save Bells Gardens campaigner Amanda was one of three residents representing the estate, formally to petition the council at the meeting on July 14.

The estate is due to have 97 new housing units built on its land, of which around a third, 32 in total, will be for private sale and 62 for social rent.

She told councillors:  “We as a community understand the need for new council homes and support the development for 44 new homes across the road.

“But we also understand the need to maintain a certain level of access to communal green spaces for the health and wellbeing of existing residents.

“Bells Garden not only offers a substantial green space the size of Brunswick Park in Camberwell, but a multi-use games area and a large play space for toddlers and young children.

“It is a community park in all but name. The council needs to recognise that while regeneration can improve the local area, residents in our community are most likely to be excluded from what’s on offer.

“We need to maintain our communal areas for the sake of community cohesion and belonging.

“We need these green spaces that elderly residents and those with mobility issues can easily access.

“We need children and young people whose families may not be able to pay for after school activities to have somewhere to play, nearby, that feels safe.”

She continued: “The council needs to stop using the demands for council housing as a reason to justify the development.

“We as a community are all too aware. We have the families on our estates living in extremely overcrowded situations that have been on the waiting list for years.

“Building more one/two bed apartments is not going to solve that problem.”

She accused the council of ignoring residents’ views for two years and “misrepresenting data, using misleading language and technical jargon” in 149 planning documents residents struggle to understand, especially those for whom English is a second language.

“At no point has the engagement process felt sincere or meaningful,” she claimed.

“Our community has spent two years having our voices ignored during the consultation process, only to have to come here as a last ditch effort for you to hear and acknowledge what hundreds of residents are trying to say.

“This speaks volumes about the process, but it doesn’t recognise the traumatic experience this is for our community or for those involved that are trying to get you to take notice of us.”

She asked the council to ‘reset and engage’, with council homes cabinet member Stephanie Cryan promising there would be further door-knocking on the estate so everyone can input into the plans that could be ‘tweaked’ to take on feedback.

But as with other infill schemes it would appear the opportunity to say ‘no’ simply isn’t there.

“We do have 15,000 on our waiting list and 32 on Bells Gardens are desperately waiting for a home,” Cllr Cryan added, highlighting that there would be a new park, play space and community centre and an increase in green space after the redevelopment.

“We have to balance both needs up,” she said, referring to housing shortages and greenery.

“I think Bells sort of strikes that balance but we will see if we can tweak it anyway.

“My commitment to you is that we will do that additional consultation, take the learnings from that, and see if we can change the proposals based on that.”

Dodson and Amigo estate campaigners also submitted a deputation. Jacquie Gilmartin asked the council about the way Little Dodson had been consulted on the redevelopment. There are eight properties, one void, one leaseholder, and six residents. None want to lose the green space or move, she explained, saying that the twelve garages proposed to be redeveloped include disabled residents.

“Nobody knew about it. I’ve been on the estate for 52 years until my neighbours knocked on the door and said Jacquie, please help us’ and I said ‘what’s wrong’ and they said ‘they’re pulling us down’.

“Not one person consulted them but what was promised was that all of them could move back.”

She questioned how a ‘right to return’ could be enforced when seven people on Little Dodson who did want to move back outnumbering the two properties being built, claiming they had been ‘lied to’.

Cllr Cryan said the right of return was across the whole estate and a consultation was in ‘really early stages’ with a residents’ project group to be set up soon.

“We are not pulling the estate down,” the housing chief added. “These are bedsits which are not a very good standard.

“They are not at a standard of quality that our residents deserve to live in.” 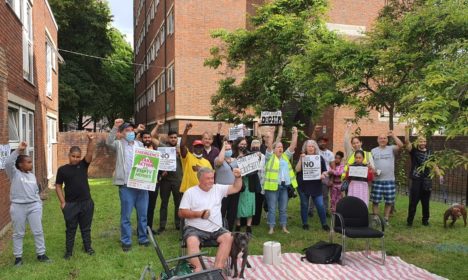 A protest held at Little Dodson on July 4

When asked how she felt about campaigners being labelled ‘nimbys’ during the furore over ex-housing boss Leo Pollak’s twitter controversy, Jacquie described the accusation as ‘derogatory and offensive’.

“We are not against council housing, what we are against is people coming in ripping the heart, taking our green spaces, taking our children’s play area, building on top of roofs.

“Buy back the land you sold off cheaply, go and do a stock search survey.

“I’ve got a resident in my flats who has been begging the council for three years to downsize her to a smaller flat. The properties are there, you just can’t be bothered to look.”

Liberal Democrat housing spokesperson Anood Al-Samerai called for a ‘constructive debate’ and tabled a motion calling on the council to prioritise bringing vacant homes into use, audit all green space in the borough, take steps to protect them for residents and urgently review the site-selection criteria for council-led developments.

The motion was defeated by Labour. During the debate she told councillors: “Estates are designed specifically with communal green spaces because people don’t have gardens.

“I can’t believe we can’t agree that there should be formal protections for green space and play spaces.”