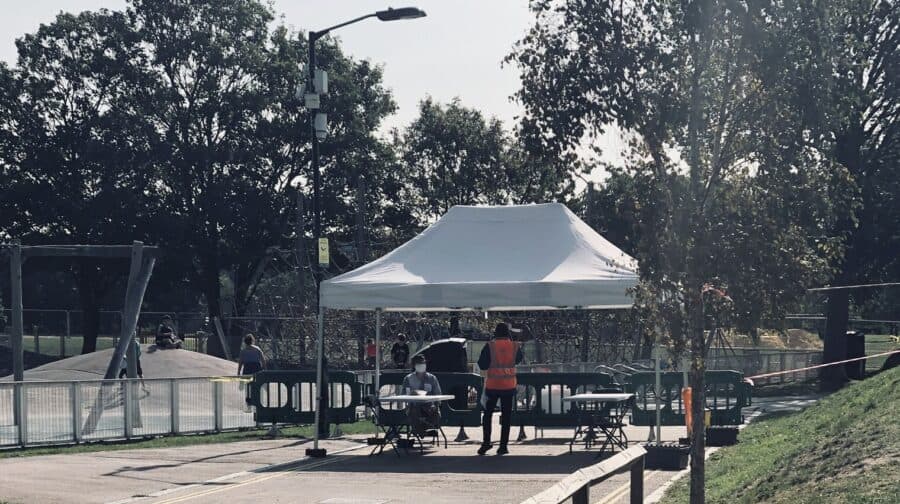 Children in Southwark are being forced off school because of a lack of tests, even though nearby testing centres are largely empty.

Despite having missed months of education over lockdown, and returning only to classes in full this month, some children are forced to stay at home because it is impossible to tell if their symptoms are coronavirus or not.

“They promised us ‘track and trace’, and they just haven’t delivered it,” said Cllr Ali, who also has responsibility for schools.

“Parents and schools have been working brilliantly together, but the government has let us down. Parents are literally calling me up, asking if I’ve got any tests kicking around the town hall.”

Staff are also affected, with the council aware of cases of school staff asked to travel to Leicester to get a test, she said.

Others, as was the case in previous weeks, were told by the government’s online tool to go to Scotland. “It’s shocking really, I’m so angry about this,” she said. One frustrated parent who spoke to the News summed up the situation even more bluntly: “It’s a s**t show.”

Lydia Bell, 44, has a daughter aged nine who attends a primary school in Peckham. Speaking last Friday, Ms Bell had spent “every waking moment” in the previous 48 hours trying to get a test for her daughter. “I’m having to drive around south London with a child who’s not feeling well,” she said. “It’s a joke.”

The mother had been given a test through the government’s online booking tool for a centre in Catford, but was not emailed a code needed to prove the booking – a glitch which affected numerous people that day.

“They turned away 200 cars, it was complete pandemonium, nobody was sent their codes,” she said.

Desperate for a test, she then went to the large testing site at Greenwich’s O2, armed with a code for an address in Scotland – a workaround others have successfully tried in previous weeks. It did not work.

“It was empty, there was nobody there,” she said. “They’ve got capacity, but they’re turning people away. The guy on the door, he said, ‘it’s really wrong, I feel sorry for you.’”

The problem is affecting a substantial number of pupils. The principal of Bermondsey’s Compass School, Marcus Huntley, estimated that around five per cent of his students had been forced to stay at home explicitly because parents can’t get a test.

“There has to be that quick turnaround of testing,” he said. “Parents are struggling with navigating the guidance in terms of a continuous cough and a temperature.  It’s just understanding how this differs from a case of the sniffles.”

Meanwhile, a mobile testing centre in Burgess Park stands largely empty despite heavy demand for tests, because appointments can only be pre-booked online.

But in a Catch-22, the government tool regularly doesn’t allow locals to book a test.

Southwark’s Cllr Evelyn Akoto, who leads on public health, said: “Went in to speak with staff at the Burgess Park test centre, as to why there’s no one there, and as I thought.  The government has intervened and as of last Sunday you are not able to walk in – you now have to book an appointment via a website that can’t keep up with demand.”

She added that staff at the centre were “equally frustrated at the absolute farce of a system.”

Just went in to speak with staff at the burgess park test Center, as to why there’s no one there, and as I thought. The government has intervened and as of last Sunday you are not able to walk in – you now have to book an appointment via a website that can’t keep up with demand

The government has pledged to get a handle on the testing crisis, but health secretary Matt Hancock has warned it could take weeks to fix.

Dido Harding, the head of NHS Track and Trace, said last week none of the government’s modelling had predicted a surge of demand in September.

“I don’t think anybody was expecting to see the real sizeable increase in demand that we’ve seen over the last few weeks,” she told a committee of MPs.

“So none of the modelling was expecting that, and that’s why we all need to think really hard about how we prioritise the use of these tests.”