The four blocks of modern flats were called for demolition this year, after they were built between 2010 and 2012 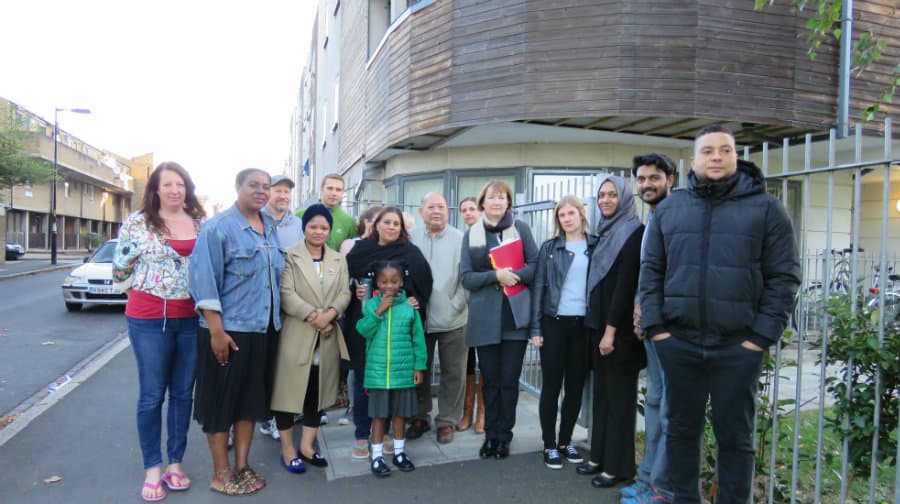 Residents whose newly-built flats were condemned for demolition are fearful the housing association trying to buy back their homes could back out of an offer to accept the highest property valuations.

Leaseholders and shared-equity owners in Solomon’s Passage by Peckham Rye Park were told by Wandle Housing Association in April that their homes would be demolished or given extensive work due to subsidence and water leaks.

The four blocks with 85 homes were built by Greenacre Homes (South East) Ltd, which went into administration shortly after construction in 2011, and was dissolved earlier this year.

One resident of five years told the News: “I thought we would stay here forever. We have worked so hard and spent so much money to make this flat ours, and it’s all going to go down in rubble.”

Another said it would force their children to move schools and make them consider having to find a new job.

Letters written to the leaseholders from Wandle in July said: “Wandle has offered to cover the cost of up to three independent valuations carried out to (RICS) Royal Institute of Chartered Surveyors standards. Once we are satisfied that any company you wish to use are a RICS-registered valuer, we will make a payment for this and uphold the higher valuation.”

The News spoke to thirteen leaseholders and shared-equity owners who all said Wandle’s chosen surveyor gave them the lowest price.

Residents fear Wandle might back out of their promise to uphold the highest of the three flat valuations. The News understands that seventeen leaseholders have used a company which gave greater valuations than Wandle’s company – in some cases with a difference of £200,000.

One of the Solomon’s Passage residents, who did not want to be named said: “We [the residents] have been quiet over the last few months as we have been trying not to jeopardise our personal situations. Wandle’s communication with us has also changed. They have suddenly become very evasive. It seems very cloak and dagger.”

Wandle confirmed that the affected residents had been given a deadline of October 20 to sign a deal, or the three-valuations would be binned. The News was also told that two leaseholders who decided to sell-up were forced by Wandle to sign “non-disclosure agreements” effectively gagging them from talking about their experiences.

A Wandle spokesman said: “Wandle has received resident-commissioned valuations from a variety of different RICS-registered valuers. Most of these valuers have provided valuations that are within a reasonable range. The valuations from one specific firm have reported an increase of up to 50 per cent compared to other valuations.”

They added that Wandle is a not-for-profit organisation with responsibilities to manage its finances “prudently, and ensure value for money”.

They said: “It is normal that transactions of this size would go through a process of independent checks and validations.”

They also said Savills had “applied equal scrutiny” to all valuations, not just the leaseholder commissioned ones.

“Wandle continues to be committed to the principles of the offer made to leaseholders and shared owners, and there is no intention of reneging on this,” the spokesperson said.

Regarding the deadline, Wandle said it would still buy-back homes beyond October 20, but those offers will be “considered on a case-by-case basis”.

“If any residents are feeling pressured to make a decision, we would ask them to speak to us so that we can offer any support they may need, Wandle has been, and continues to be, flexible to the needs and circumstances of residents during this difficult period,” they said.

On the non-disclosure agreements, Wandle said: “Confidentiality provides residents with protection against pressure to reveal the details of their settlement and avoids confusion arising from the variations in offers.”

Camberwell and Peckham MP Harriet Harman told the News: “[Wande] should be doing their bit to help the people who’ve found themselves in this situation through no fault of their own.”