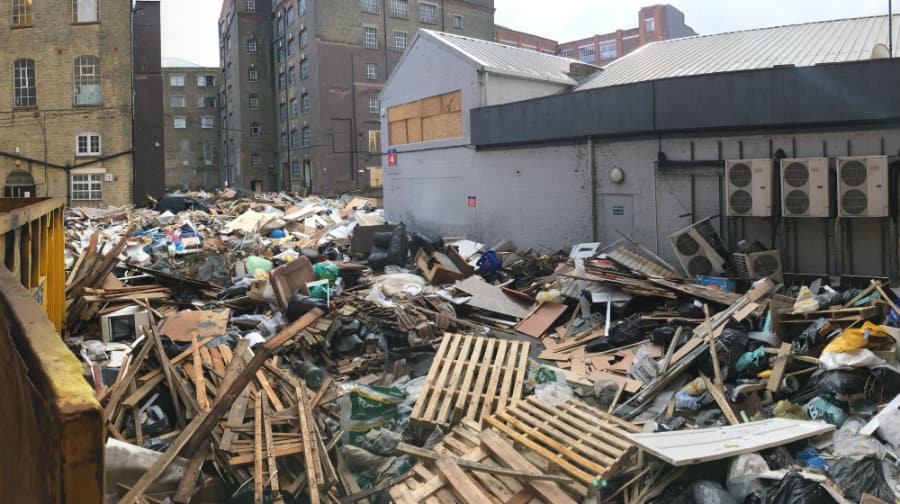 The mess left at Crimscott Street

The owners of a vacant business estate in Bermondsey are facing an eye-watering bill of “tens of thousands of pounds” after trespassers dumped mountains of rubbish at the site earlier this month.

On February 1, a large group of people entered 40 Crimscott Street, off Grange Road, where they forcibly entered buildings, smashed windows and doors and dumped hundreds of tons of waste.

A spokesperson for Rich Group, who own the site, told the News this week that around 25 to 30 vehicles moved into the site, and that CCTV cameras were disabled “in a professional manner.”

They said: “Our first concern has been for the safety and security of our staff, tenants and neighbours throughout this unfortunate incident.

“We have previously and will continue to lobby Central Government to toughen the law in this area as without further legislation such disruptive, intimidating and costly events will continue at significant cost and inconvenience to land owners and neighbours alike.”

Edward Rich, a director of the group, later told the News: “The clean-up will cost tens of thousands of pounds. It will be covered by insurance but it has been an absolute nightmare sorting it out.”

Police said the group had previously been evicted from a site in Walworth.

A spokesperson added: “Police were called at 17:50hrs on Monday, 1 February to reports of a group of travellers entering a yard at Crimscott Street SE1. Damage was reported to gates, buildings and a window. The travellers left on Tuesday, 9 February after being served with an interim possession order by court bailiffs. Enquiries into the criminal damage continue.”

Another image showing the mess left in the business estate.