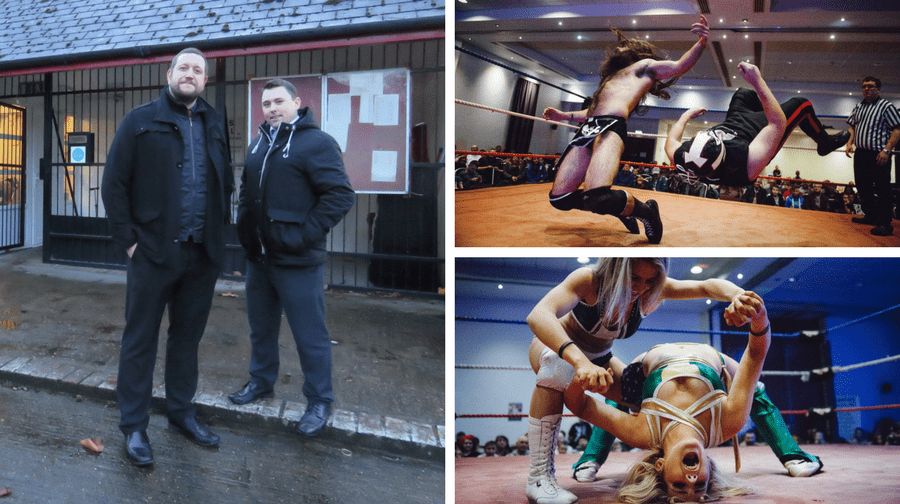 A pair of old friends hope to bring Saturday family entertainment to Bermondsey by hosting their own live wrestling shows.

David Bates, 34, and Matt Juby, 38, who grew up in Bermondsey, have set up Apollo Championship Wrestling (ACW) and will hold their first live event with eleven professional wrestlers on April 1.

The best friends, who both trained as wrestlers for a year, said they would like to get more families and children along to the event – and are hoping local people will get hooked on their characters and storylines.

Matt Juby and David Bates outside Keeton’s Hall, in Bermondsey, where the wrestling event will take place

“My two children – aged nine and ten – are coming as well as their friends, so there are some children coming but we’d like more,” said David, who grew up on Keeton’s Estate and now lives in Epsom, Surrey.

“We just think this will be good for the community; the only thing on a Saturday locally now is watching Millwall, there’s nothing going on.

“Funding is being cut for everything at the moment; the local schools and the clubs are starving for money so if this could just inspire some kids to see that they can do something different, that there is something else out there, then the sky is the limit.”

“If you want to go to a football match nowadays you are paying a lot for a match,” added Matt, who grew up in Lucey Way and now lives in Nunhead.

“When I was a kid we had WWE and that sort of thing, but there was nothing for us to physically go to unless you travelled outside of Bermondsey. So we thought why not do something here because it would’ve been great for us as kids.”

David and Matt were keen to emphasise that wrestling is not violent and that their shows will be child-friendly.

“People have a stigma about wrestling that it’s violent,” said dad-of-two Matt, who works as a support clerk.

“It’s not, it’s theatrical. It’s the same as Eastenders; it’s not real and it’s really just a soap opera.”

“We’ve got characters and it follows a storyline,” added David, a facilities manager. “It’s a soap opera in a wrestling ring.”

The first event will take place at Keeton’s Hall, 2 Tranton Road, at the junction of St James’ Road, on April 1. Doors will open at 1.30pm and the show will take place from 2-5pm.

There will be six matches on the day, including a women’s match between Bobbi Tyler and Chakara, and there will be a Del Boy character named Savvy Sid Scala.

There will be a bar serving non-alcoholic drinks and snacks, and merchandise will be on sale.

Children are welcome accompanied by a paying adult over the age of eighteen.Tickets can be bought by visiting www.acwuk.com or www.facebook.com/acwukwrestling

Watched this today; it was fantastic and really entertaining. Lots of families were there with their kids who all enjoyed the bouts. Wrestlers James Best and Savvy Sid were the highlight for me. Hoping there’ll be more in the future.