Lee Roberts and Jordan Smith are running 15km a day throughout June to raise £25,000 for leukaemia research 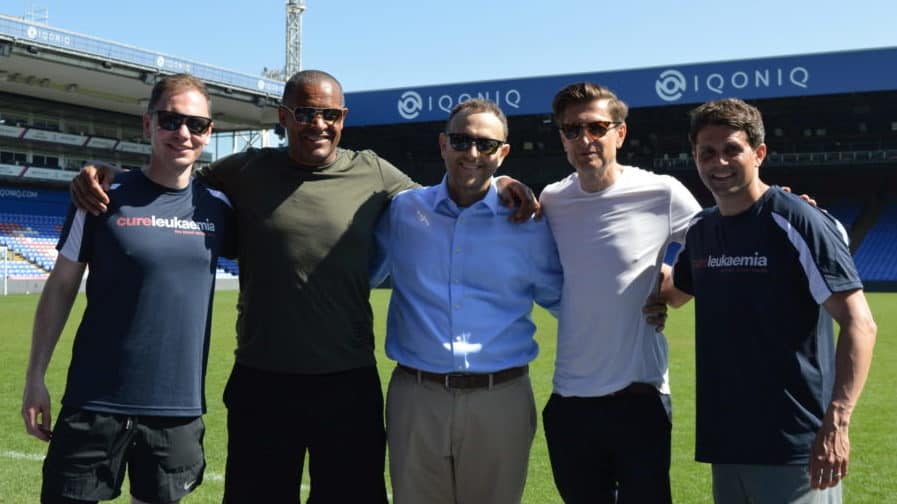 Crystal Palace and its fans are backing a 460km running challenge in support of a former Southwark News deputy editor who has battled leukaemia since 2017.

Geoff Hill, born in Croydon and now based in Hither Green, worked for the News in the early 1990s before going on to become ITV’s news editor. 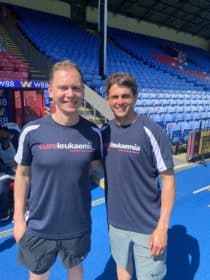 Jordan Smith and Lee Roberts, who are running 460km in 30 days to raise funds for the charity Cure Leukaemia

He first became unwell four years ago, and soon after received a shock cancer diagnosis.

Since then he has undergone biopsies, radiotherapy, chemotherapy, a bone marrow transplant, a stem cell transplant and a month fighting sepsis in hospital – only to discover that his cancer had returned.

This month Geoff’s two brothers-in-law, Lee Roberts and Jordan Smith, are running 460 km the length of London to Paris, all around the streets of south London in a ‘Palace to Paris’ run.

Starting at Selhurst Park, and with the backing of club boss Steve Parish, they have already raised an incredible £23,965 for the charity Cure Leukaemia.

The duo will be running 15km every day, with no rest days, until June 30 with the aim of raising £25,000 to help fund new research that could help Geoff, and people like him, who have exhausted conventional treatments.

On their JustGiving page they explain: “After several relapses, Geoff’s leukaemia has now advanced to the stage where options are limited, and he is pinning his hopes on getting a place on a clinical trial to finally overcome this dreadful disease.

“Watching anyone suffer with any type of cancer is heartbreaking and, as a bystander you feel utterly helpless and unable to make things better.

“The past twelve months have been especially difficult for us being kept at arm’s length because of COVID, unable to support Geoff and his wife Nat when they’ve needed us the most.

“While we’re still not able to physically be with Geoff and Nat to help them directly, we’ve decided that we can raise awareness for Cure Leukaemia and the incredibly important work they carry out.” 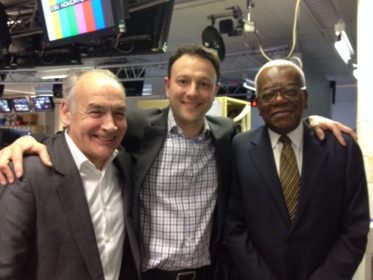 The challenge will certainly be gruelling, with temperatures expected to reach 28 degrees in the next week.

Among those inspired by their tenacity is ultra-marathon runner and comedian Eddie Izzard, who praised them for their efforts and told the pair to “run, walk, stagger – just get it done!”

Geoff, a father of three, has written about the impact of his illness on Crystal Palace FC’s website.

He described going from an active gym-goer at the peak of his fast-paced career to being constantly exhausted and knowing something was wrong.

“It’s hard to describe what was actually wrong; I just felt run down. I assumed it was some kind of virus,” he explained.

“I had symptoms which I have since learned are potential signs of blood cancer; tiredness, a severe lack of energy, night sweats and difficulty in shrugging off infections.

“My health was deteriorating at an alarming rate. In just three weeks I went from my usual gym routine to being violently ill after a warm up.

“My heart would start racing after walking up a flight of stairs. I found it harder to go for the shortest of walks, and even started waiting for later trains to avoid crossing the bridge to a different platform.

“Before then I had no idea that my red and white blood counts had collapsed, or that my immune system was completely compromised.

“I had no idea that the smallest infection or virus could have killed me.

“I had no idea that I was practically a dead man walking.”

After a blood test sent off by his GP, Geoff received a phone call from Lewisham Hospital.  Doctors told him he had to get to A&E ‘within the hour’ as he was so ill.

Soon after he was diagnosed with acute lymphoblastic leukaemia and since that point has had 100 rounds of intravenous and intrathecal chemotherapy, 24 fractions of radiotherapy, and taken more than 6,000 pills. 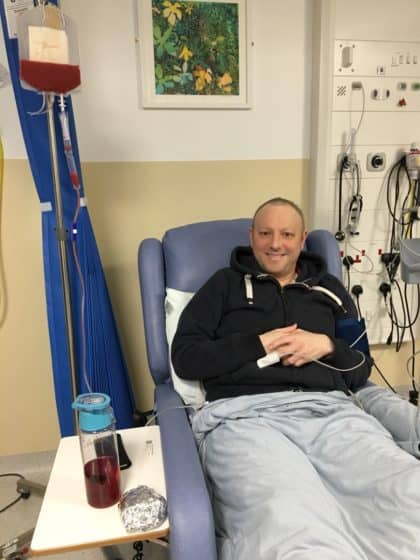 Geoff is being treated at Kings College Hospital

Since relapsing his brief return to work has been put on hold and he now describes himself as “hopeful, but also realistic, about pulling through”.

Currently he is having top-up chemotherapy treatments and believes his best chance is to take part in a clinical trial for a new treatment at UCLH, called CAR-T cell therapy.

This experimental new treatment involves harvesting T-cells from the immune system, adapting them and then putting them back in the body in the hope they can fight the disease.

“I have been blessed with the most amazing family and friends who have rallied around me in a way I have found humbling and overwhelming,” he says.

“I would not be here today if it wasn’t for them.

“Their strength and support has kept me positive, and together we are as determined as ever to find that way out.”