Artist Rafael Klein is currently in Venice launching his latest artbook The Landscape of the Future, with a film and poetry presentation that he recently premiered at an open day at his Nunhead studio. On his return he will be preparing for an exhibition of his latest artworks, Paradise, at Zari Gallery in the West ... 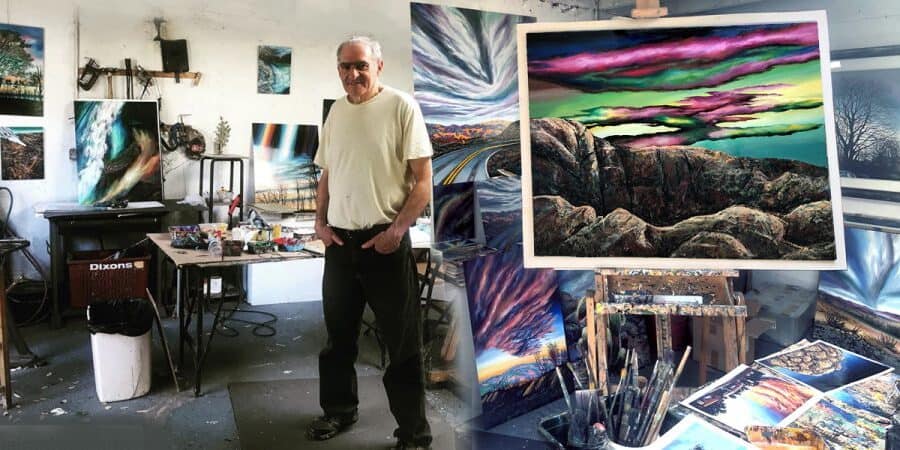 Artist Rafael Klein is currently in Venice launching his latest artbook The Landscape of the Future, with a film and poetry presentation that he recently premiered at an open day at his Nunhead studio. On his return he will be preparing for an exhibition of his latest artworks, Paradise, at Zari Gallery in the West End.

Klein’s work explores the ways we impose our own personal narratives on the world we inhabit.  Sometimes our preconceived ideas about a place are so strong that, when we finally arrive, it is these imagined stories and sensations that surround us. The work considers the ways in which we try to shape our environment to suit ourselves, creating invented landscapes which impact on our ability to perceive the reality of the natural world.

This artistic concern has been developed in a series of exhibitions incorporating sculpture, paintings, books and film. These take on the quality of a narrative journey through an altered reality.

Rafael grew up in Coney Island, Brooklyn, New York. As a child he was fascinated by the world of imagination to be found in the famous amusement park. ‘Tin Temples’, his first large solo exhibition at 112 Greene Street in New York, was an installation of huge relief works exploring different aspects of American mythology. The Car, Hollywood, and Florida are all myths creating their own ‘invented world’. They all came together in an immersive environment, seductively reproducing these icons while hinting at the darkness lurking just behind the stage set.

Transformations of perceived reality have continued in immersive large-scale exhibitions. Dante’s Divine Comedy was the basis of an exhibition at the12th century Biblioteca Classense in Ravenna. Inner Cities looks at nature through the eyes of a city dweller.  More recently, Klein has returned to the magical world of Coney Island in a series of sculptures presented at the Royal Academy and an artists’ book and film presented last year at the British Library.

Each exhibition is accompanied by a limited edition artists’ book.  These can be found in the collection of New York’s Museum of Modern Art, the Tate, the British Library and many other public institutions.

Klein’s public sculptures are also transformative environmental interventions. These explore the nature of public space. They incorporate community collaboration in creating permanent sculptures which both crystallise and expand the space’s uses and identity. Many can be seen around London, especially in his home borough of Southwark.

Paradise is a continuation of this artistic concern, as it explores our experience of the beauty and fragility of the natural world in the 21st century.