Parents: ‘We waited years for our little girl to be able to say mum and dad’

“It was such a magical moment. We waited four years to hear her say those words," said her dad 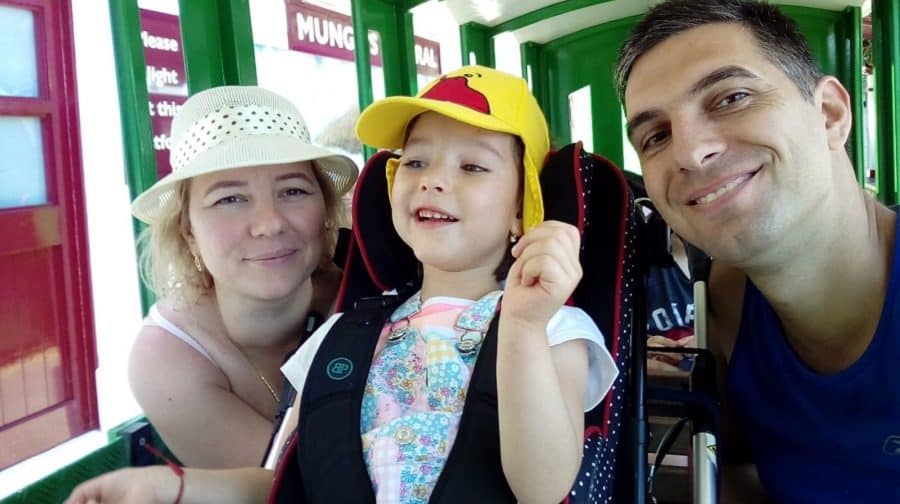 Anastasia with her mum and dad

A five-year-old girl who was locked in her body has started taking her first steps and saying “mummy and daddy” for the first time after treatment at the Evelina Children’s Hospital.

Anastasia Buturin gradually stopped moving her arms, hands and legs as a baby, and doctors were baffled by the cause of the condition.

By the time she was three, she could no longer move her head, and was barely able to open her own eyes.

“When Anastasia was born she was a normal healthy baby,” said her father, Valentin. “She was very happy, smiley and made lots of eye contact.

“When she was around three months old, we noticed that she was becoming very floppy and was struggling to hold her head up and as she got older she couldn’t move her hands, arms or legs.

“We were extremely concerned but no one was able to tell us what was wrong. We were desperate for answers.” Anastasia as a baby

Initially, the little schoolgirl could communicate by moving her eyes – but even that became impossible.

“It was extremely heart-breaking watching Anastasia’s body deteriorate. We began to fear that her life was in danger,” Valentin said.

The toddler was referred to the Evelina in 2018, and experts discovered she had a rare genetic condition called Tyrosine Hydroxylase deficiency.

It means the body does not produce enough dopamine, which helps muscles and the brain to function effectively.

But in June 2018, Anastasia started dopamine replacement therapy – and her parents say the change was remarkable. “Within two days she was able to wave her hands around, open the palms and cuddle her teddies,” her 38-year-old father said.

“Six months after she began treatment she started saying words and she said mum and dad for the first time last December.

“It was such a magical moment. We waited four years to hear her say those words.”

Her life has been transformed by the treatment, said the doting dad. Now the family, from Seaford, East Sussex, hope that Anastasia will carry on progressing and attend a mainstream school.

“It’s extremely pleasing to know that Anastasia has responded so well to the treatment,” said Dr Helen Mundy, a consultant at the hospital.

“The condition can be very difficult to spot and diagnose but at Evelina London we are very fortunate to have teams here that are able to diagnose and treat rare conditions like this.”

Southwark NewsNewsParents: ‘We waited years for our little girl to be able to say mum and dad’