Baby Isaiah suffered a severe brain injury during labour, which left him unable to breathe on his own 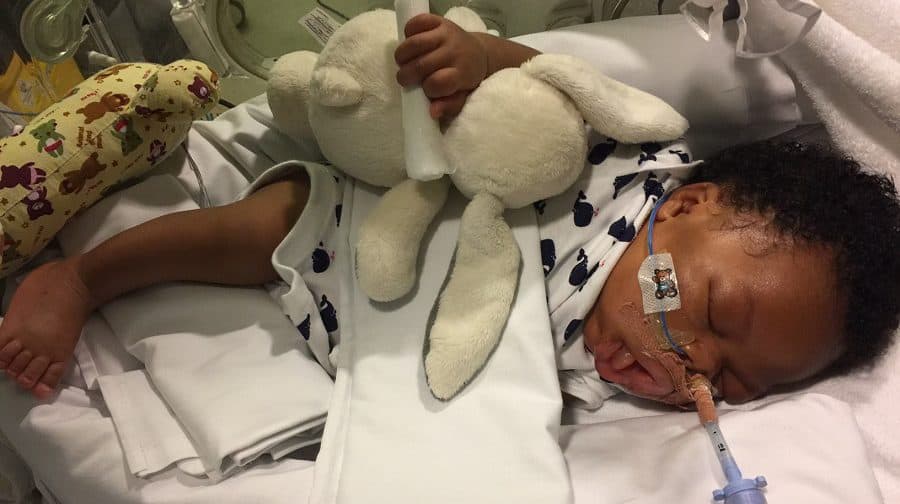 A desperate mum and dad have called on King’s College Hospital to support them in their bid to keep their brain-damaged son alive, over fears the hospital may seek powers to end his life.

In an echo of the tragic story of Charlie Gard, whose parents gained sympathy around the world in their battle to obtain further treatment for their son, Lanre Haastrup and Takesha Thomas want assurances that son Isaiah will not be taken off intensive care and switched to palliative care. They say they have “lost all trust” in the hospital, after Isaiah suffered brain damage, resulting from complications during labour on February 18 this year.

Mum Takesha, from Peckham, said she “almost died” during the incident, and lost nearly half of her blood, leaving her in a coma for several days. “I could feel the baby shaking inside of me. He was inhaling blood,” the 36-year-old said.

The incident has left five-month-old Isaiah with a weak and inconsistent “respiratory drive”; this means that although his body and organs are growing naturally, his brain lacks the instinct to breathe independently for prolonged periods of time.

A Serious Incident Report from King’s, published on July 28, found there was a delay in identifying that the baby’s heartrate had dropped significantly for approximately 27 minutes, before a doctor was summoned and an emergency caesarean was ordered. The report said “ten or more minutes” could have been saved, which would not have resulted in the delivery of a perfectly healthy baby, but would likely have reduced the severity of the neurological damage. The report found no grounds for disciplinary action.

Isaiah is currently hooked up to a ventilator which breathes for him, and he is fed through a nasal tube. He rests in a shared room in King’s neonatal intensive care ward, where his mum and dad take turns to visit him “unrelentingly, every day”. Lanre, a 38-year-old practising lawyer living in Brockley, visits his son from 9pm to 1am after work. Takesha, a stylist, takes care of Isaiah from 11am and 4pm.

The couple are furious at King’s for the damage they claim the hospital has done to theirs and their son’s lives.

Lanre told the News: “It’s like the Charlie Gard case. They want to end my son’s life.”

The tragic case of eleven-month old Charlie Gard, who died last month after a protracted legal battle, shone a rare spotlight on the role of courts in such cases, which journalists often cannot report on due to safeguarding the privacy of the family.

For Lanre and Takesha their baby son’s life has not yet reached the stage were the courts are involved, but they do say that they have refused permission for doctors to end Isaiah’s life, and disagree that to do so would be “in his best interest”.

The family contacted the News upon receiving word from their solicitors that King’s College Hospital had written to the High Court, to notify it of the disagreement. In an “Application for inherent jurisdiction order in relation to children”, dated May 25 this year and seen by the News, an application is made for “Decleration [sic] that limitation or withdrawn [sic] of treatment is in Isaiah’s best interest.”

But when questioned about this by the News, a King’s College Hospital NHS Foundation Trust spokeswoman responded: “We are trying to reach agreement with the family on the next steps for his care to prevent the need for a Court to decide on the most appropriate treatment plan. It absolutely does not anticipate a court case.” The spokeswoman confirmed this week that no further request had been made to schedule a court hearing date.

The Trust was asked whether the family’s doctors had repeatedly advocated that Isaiah should be allowed to be transferred to palliative care, and allowed to die, as suggested by his parents, but it did not respond.

Lanre said: “My son has been cheated out of his life. It’s done untold hardship on us. We have suffered in the last months, and now we have to ask them [King’s Hospital doctors] to keep him alive.”

Unless the hospital successfully applied for powers from the High Court, he added, “they would need our permission to transfer him to palliative care and to switch off his life support. We want to take him home so we can look after him.

“We believe they have rushed into this decision to end Isaiah’s life. Trust has broken down to the extent that we have no faith in them anymore.”

Takesha added: “From every meeting we’ve had with them they have always tried to steer us towards palliative care. We are determined to do everything possible for our child, and they’re telling us ‘no we can’t’.”

“It’s felt like they have been trying to pressure us to accept that Isaiah should die. It’s up to us to look after him for the rest of his life. They are telling us to have him die.”

Should any High Court hearing go ahead, the embattled mum and dad believe their core argument for continuing Isaiah’s treatment will be that King’s has not tried all the options to “encourage” his respiratory drive, which Lanre says is “inconsistent” but not non-existent. And that Isaiah’s doctors should reduce the “cocktail” of sedative drugs, which are making him “completely dependent” on a ventilator to breathe.

The King’s spokeswoman said: “Our patient sadly has a serious and profound brain injury, and has been cared for in our Neonatal Intensive Care Unit since his birth five months ago. Sadly, despite intensive treatment, he remains fully dependent on life support. We have been, and continue to, work closely with the family in discussions about the long-term prognosis and plan of care, and it would not be appropriate to make any further comment.”

The parents also requested their son be transferred to the Evelina Children’s Hospital near Waterloo, in the hope of getting better care from its specialist facilities and staff, particularly for physiotherapy for Isaiah. But their application for transfer was recently refused by the Evelina. “If our relationship has broken down with the staff at King’s, and this has all clearly culminated in a lack of trust, it must be the logical thing to do to transfer him to the Evelina,” Lanre said.

A spokesman for Guy’s and St Thomas’ NHS Foundation Trust, which runs the Evelina Hospital, declined to comment on its refusal to admit Isaiah from King’s, citing patient confidentiality.

Responding to the parent’s comments about Isaiah’s treatment, a King’s spokeswoman said: “King’s does have paediatric physiotherapy services and no concerns have been raised with the therapy team about the patient’s care. He has been under the care of paediatric physiotherapy and paediatric occupational therapy teams, and an individualised therapy programme has been established for him. As is standard practice in paediatric care, the family has been involved in the patient’s physiotherapy and occupational therapy treatment. Alongside specialist nurses, they are involved in delivering therapy to the patient on a daily basis. Our therapists regularly review the patient and update his therapy programme as required.”

The spokeswoman added: “The patient’s respiratory drive has been assessed regularly by the neonatal team, the paediatric respiratory team and by the external opinions. He has been supported with synchronised ventilation for many months which allows for and responds to any respiratory effort generated by the patient. He has not been on sedating medicines since the second day of his life.”

However, King’s responded that Isaiah had had an individualised therapy programme under its physiotherapy and occupational therapy teams, involving the parents, which was regularly reviewed and updated and that no concerns had been raised with the team about Isaiah’s care.