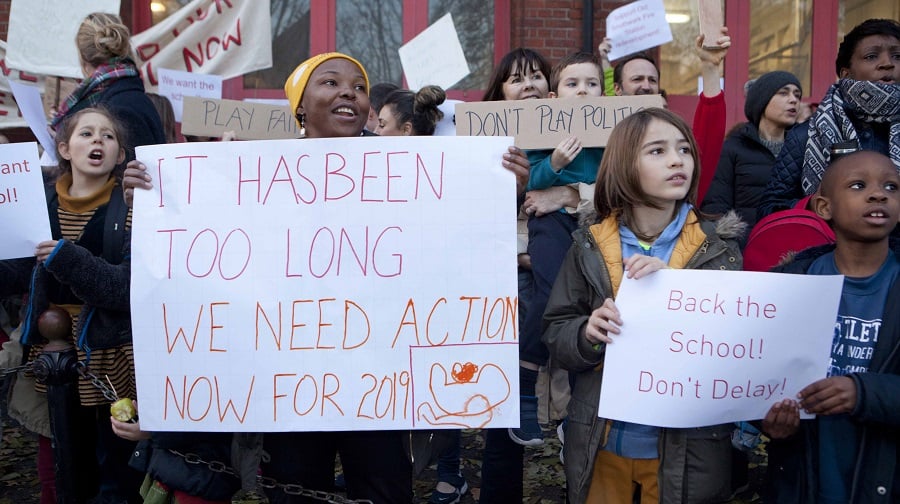 Parents turned out in their droves to call for plans to build a secondary school on the former Southwark Fire Station site to push ahead.

Developer Hadston submitted proposals to the council in February to redevelop the Southwark Bridge Road site into a secondary school and sixth form, sports hall, and homes.

The company had hoped the school would be open by September 2019 if plans were approved by the end of the year.

But there could be a hold up, as the council is pushing for affordable housing to be included in the development.

After paying £54million for the site in 2015, Hadston has said it is not viable to deliver affordable housing as well as the school and sports facilities.

Paola Wilson, who helped organise a parents’ rally near the site on Friday, November 17, said the area was “crying out” for a secondary school.

The 49-year-old barrister said there were secondary schools in the area, but that they were either all-girl or Christian schools.

“They’ve come up with a proposal that’s very useful for the community because it provides a school and a sports centre that can be used by everybody and it’s going to be a fantastic facility,” said the barrister, who has a six-year-old son.

“There are four primary schools within eight minutes’ walking distance of the site.

“Unfortunately there’s been an exodus of parents and families [from the area] historically because once their child is of secondary school age, they have to be somewhere within the catchment area of a secondary school.

“I think it’s going to be a bit of a hot potato because if it doesn’t get built, it’s an enormous waste of an opportunity for the borough.”

If plans are approved, the two-storey school is expected to admit 180 children a year, growing year on year.

The proposals submitted to the council also include plans for 199 homes, including a mix of one, two and three bedrooms, as well as converted fire station cottages for family homes.

CGI of the proposed development

Cllr Mark Williams, Southwark Council’s cabinet member for regeneration and new homes, said: “The school on the fire station site is our top priority and absolutely critical in ensuring Southwark has enough secondary school places for our children.

“The delay in taking a decision on the current planning application is due to the council awaiting confirmation from the Greater London Authority on how it wishes to address the amount of affordable housing within the scheme.”