Parents have no truck with new homes plan in Dulwich 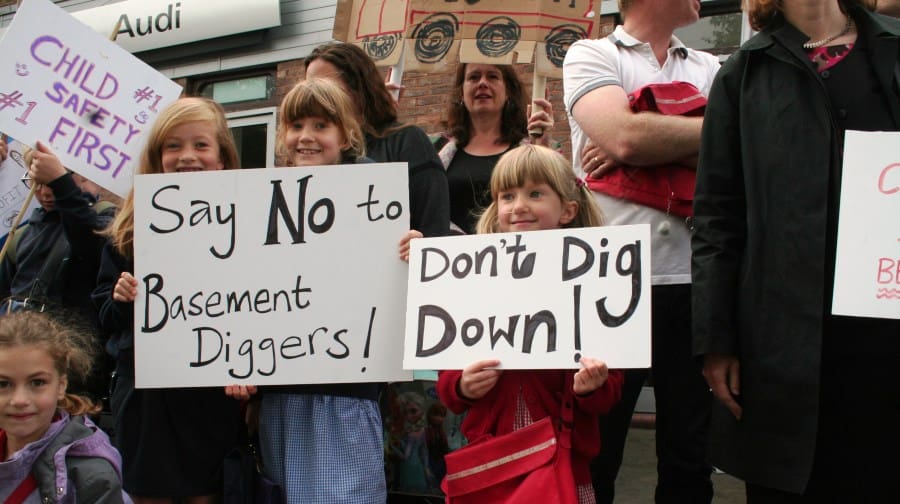 Concerned parents took to the streets of Dulwich in protest this week to block a development which could lead to thousands of lorry journeys on a popular school route.

A petition to oppose The Dulwich Estate’s proposal to build nine large town houses on the site of the old SG Smith Workshops behind Dulwich Village now has 500 signatures, which will be submitted to the council before the public consultation closes on Saturday.

Father of three and Dulwich Hamlet School governor, Andy Skipwith, started the campaign to send The Dulwich Estate back to the drawing board when he realised the plans included basement ‘snugs’ and underground parking, which would require digging a hole the size of two Olympic swimming pools.

“The problem is with the size of the development,” said Mr Skipwith. “We are worried about children’s safety in regard to the construction traffic that would be involved.”

To clear out a 5,000 cubic metre basement area, Mr Skipwith estimates 2,000 heavy goods vehicle journeys would need to be made to and from the site. “They are big and heavy and travel under time pressure – it’s dangerous in terms of people getting squashed,” said Mr Skipwith, who is particularly concerned about the school children travelling to the fourteen schools in the area.

Newly elected MP for Dulwich and West Norwood, Helen Hayes, stood alongside the defiant group of parents, children and residents as they chanted ‘stop the basements, stop the trucks’ near the site before school on Tuesday morning. She has been supporting the grass-roots campaign to get landowner The Dulwich Estate to reduce the scale of the development.

The council generally takes a cautious approach to basement developments and would prefer smaller properties to be built in Dulwich, according to Ms Hayes, who is also a councillor for College ward. “The need in Dulwich is not for large family homes but for smaller properties, so people who need to downsize can stay in the area,” she said.

Although some excavation will be necessary on site to remove the petrol tanks and decontaminate the soil, Ms Hayes, says the level of excavation needed to create basements under each property is “far more extensive” than would otherwise have been necessary.

“That’s a lot of construction traffic when you consider ten thousand children go to school in Dulwich every morning,” she added.

Mother of two, Celia Roberts, 47,  said her six and nine-year-old were in schools either side of the proposed development, which she described as “untenable.”

“They cross this road to go for their lunch every day and they use this as a cut through all the time to get to the church.”

Chief Executive of The Dulwich Estate, John Major, told the News: “Part of the site for redevelopment was formerly a petrol filling station. In order to decontaminate the site, the tanks have to be removed and there is also an existing basement under the workshop. It is for this reason that the scheme for the new homes incorporates underground parking.

“This has the benefit of removing vehicles from the street which, in the long-term, will reduce the risk to children and other pedestrians walking past the homes.  The construction works will be governed by a traffic management plan which will seek to limit the movement of heavy vehicles during the hours when children are going to and leaving from, school premises. The replacement of a car repair workshop with new homes will enhance the amenity of this residential area,” he said.

Southwark NewsNewsParents have no truck with new homes plan in Dulwich