Parents take their battle to get Harvey new drug to parliament 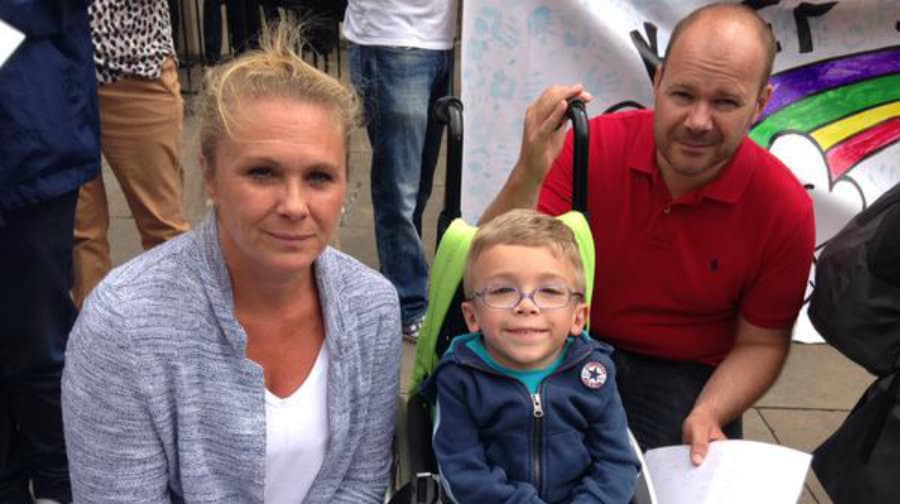 Harvey Brown with his mum and dad, Vikki and Dean, at the protest outside parliament. Pic: @Annareporting

A determined little Millwall fan took his fight to Westminster last week, as children suffering from a rare disease demonstrated to get a drug on the NHS which could change their lives.

Harvey Brown and his mum and dad, Vikki and Dean, joined a group of fifty protestors on Wednesday to demand that the health service fund the drug Vimizim, which could help Harvey and the 77 other children in the UK with the ultra-rare disease, Morquio, live a longer, happier life.

Morquio is an inherited illness which means children like Harvey rarely grow to above three foot tall or live beyond their twenties.

After a successful clinical trial, Vimizim was shown to help children like Harvey grow stronger, need fewer operations, walk without mobility aids and live for longer.

Since it was licensed by the European Medicines Agency in April last year, Harvey and his mum and dad have been waiting to hear whether the NHS would pay for the expensive drug to be offered in this country.

After the decision was postponed again until October, families like the Browns, of Galleywall Road, decided to tell the government themselves what getting the drug would mean to them.

“It would mean we wouldn’t lie in bed at night worrying about his future,” said Vikki, 46. “It would mean he could have a better quality of life and be able to do more than he can at the moment. Most importantly it would prolong his life,” added Vikki, who wishes more than anything that she could swap places with her beloved son.

The MPS Society – the charity which supports Morquio sufferers, has set up a crowdfunding page to raise money for children like Harvey to get the treatment they need until the NHS decision in October.

To show how many people are behind Harvey and other Morquio sufferers Vikki and Dean have also set up their own petition. which you can SIGN HERE  as well as asking everyone who is on Twitter to send a tweet to the Secretary of State for Health,  @Jeremy_Hunt with the hashtag #fundourdrugsNOW