Over the years Terry made the adventure playground not just his place of work, but a second home for his family 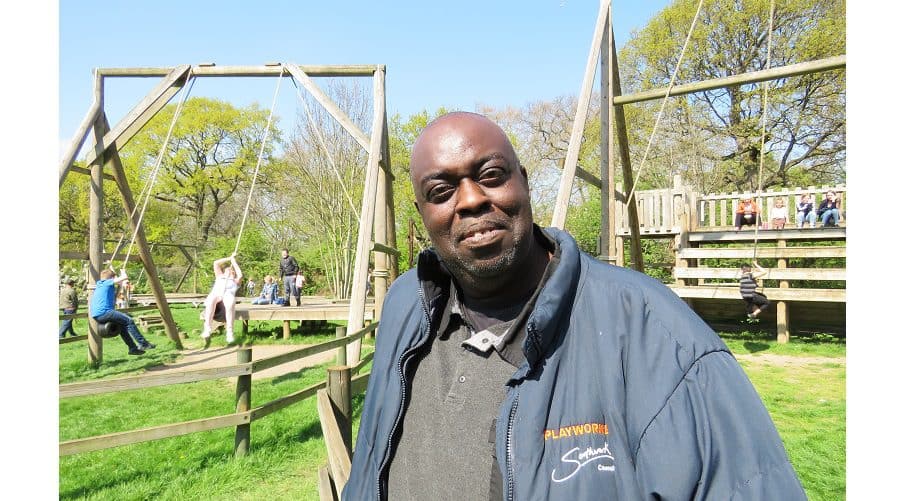 Terry Jones on his last day looking after the adventure playground

Young families gathered in Peckham Rye Park to bid a fond farewell to Terry Jones, who has run the Adventure Playground in Homestall Road for 25 years.

The 49-year-old is retiring with a “heavy heart”, after watching generations of local kids and their parents use the centre.

He told the News he was unhappy with plans to redevelop the playground site, which were opposed by local families who helped throw Terry’s send off on March 7.

“I’ve been crying all week thinking about this day, but it’s time to move on,” said Terry, who grew up in Lewisham and now lives in Abbey Wood.

“They are redeveloping the site and it’s not for me, it’s not the way I want to see this place go forward.”

“I’ve seen a lot of change here, particularly in the demographics. Generations have been coming here and I have got to know them all. You see kids grow up and start bringing their own little ones.”

Terry’s career with the council started “by accident” when he applied to Southwark Council to become an after-school worker at Michael Faraday School in Walworth.

“Opposite that was an adventure playground in Burgess Park and an office which I transferred to. Then I started in Peckham Rye in 1991,” Terry said.

“Actually I’ve worked all over Southwark, but this one is my baby. Peckham Rye is my favourite by far.”

Over the years Terry made the adventure playground not just his place of work, but a second home for his family. He said his wife and two daughters, aged seventeen and fourteen, are “as much a part of the park’s furniture” as the climbing frames.

After his departure, Terry will go on holiday for a much-needed break, but said he had other possible career moves lined up.

He said: “I don’t want to go into the politics of why I’m leaving too much, but I think this park needs to be kept as a place for children aged ten or more. They need their own space.

“Working here has been more like working as a youth worker or a counsellor than a caretaker. The place really needs people who know the kids and can keep them safe.”

Southwark’s Council’s plans for the centre include building a £4m two-storey children’s centre for under-five-year-olds, on a grassy patch of ground located next to the existing hut.

It is understood that staff who help run the adventure playground are being merged into the council’s Parks department, and that agency staff have been hired in the interim period to replace staff who are leaving.

We constantly overlook play spaces for the 10 to 16 year old, yes, facilities for young childcare and play spacees are very short, however, councils should be focusing on all children, they are the adults of tomorrow!

A trip down memory lane seeing Terry’s face! I use to go there almost every day with my 2 brothers and sister in the summer holidays 1997/1998. It was like a little family where Terry and his team built relationships and looked out for each and every child in there. Thanks for the great memories Terry!!!