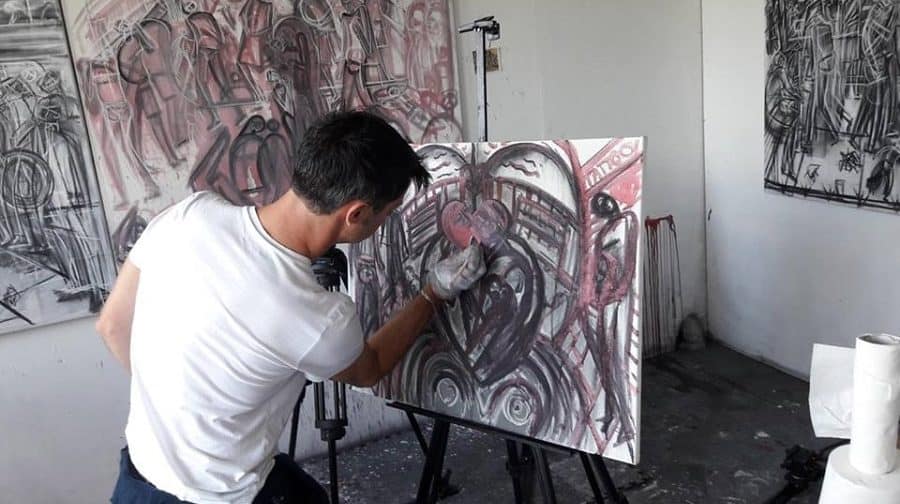 Behind the scenes making the video

Paul Weller has released the first single from his new album and eagle-eyed fans from south London were quick to spot Walworth landmarks in the music video – and Rotherhithe artist Ed Gray.

Movin’ On is the first track to be released from True Meanings, is 60-year-old Weller’s fourteenth solo album and the 26th from the former Jam hitmaker’s career.

The video – posted on YouTube on Wednesday – follows Rotherhithe-based artist Ed Gray as he walks through Walworth Road and Elephant and Castle, interspersed with scenes showing him creating a beautiful painting inside a studio.

Incredibly, the painting was completed in just a day – and the entire video finished in under a week.

Readers will be familiar with shots of the Nags Head, Clubland, and the ex-Labour HQ, John Smith House peppering the finished product.

Producer Mark Baxter told the News: “Myself and my business partner at Mono Media Films, Lee Cogswell, have worked with Paul Weller a few times recently, so we pitched to make a video for his latest album ‘True Meanings’ once we knew it was complete.

“Paul gave us the song ‘Movin’ On’ and it was my wife Lou who thought of a artist in it somehow after listening to lyrics like ‘the evening sky is painting itself’.

“Our treatment was to use the everyday ‘beauty’ of a normal high street juxtaposed with the artist interpreting the song in art form.

“As I’m from around SE5/SE17 the urban area had to be the Elephant and Walworth Road for me, as I like to ‘big up’ the area and the talent within it if I can.

“My role is one of a producer/writer at our company, so sorting logistics – locations, budgets, and shaping up of the treatment.

“I  have worked with Ed Gray before so knew he was very talented and was perfect for this project.

“He also loves Paul Weller so it all tied in nicely.

“We filmed all day on the Walworth Road, and in Elephant, on a Wednesday, then into Ed’s studio on the following Saturday 10am until midnight.

“Lee edited on a Sunday and Monday and delivered it on early on Tuesday.

“Very tight schedule, but Lee and Ed did a fantastic job. “The record company, Parlophone, loved it and it came out in support of the album this week.”

Artist Ed Gray told the News he was delighted to feature in the video and produce the painting unveiled at the end – even though he only had 24-hours to complete it – as he is a big Weller fan.

“I have always been inspired by Weller’s work and have used his lyrics as titles for my paintings before.

“It was a really exciting project to be involved in.

“It was a challenge producing his work within just 24-hours – when his pieces can normally take months to complete.

“We had to do it very quickly.

“It was all filmed in one day – quite a stressful day.

“But for something that happened so quickly it worked really well.

“I didn’t know if I would be able to do it, and do something good.”

“I saw it as a song about creativity, and the importance of love and relationships, while walking through the streets of Walworth.

The former St Thomas The Apostle teacher has said  he is planning to put the painting up for sale in future.