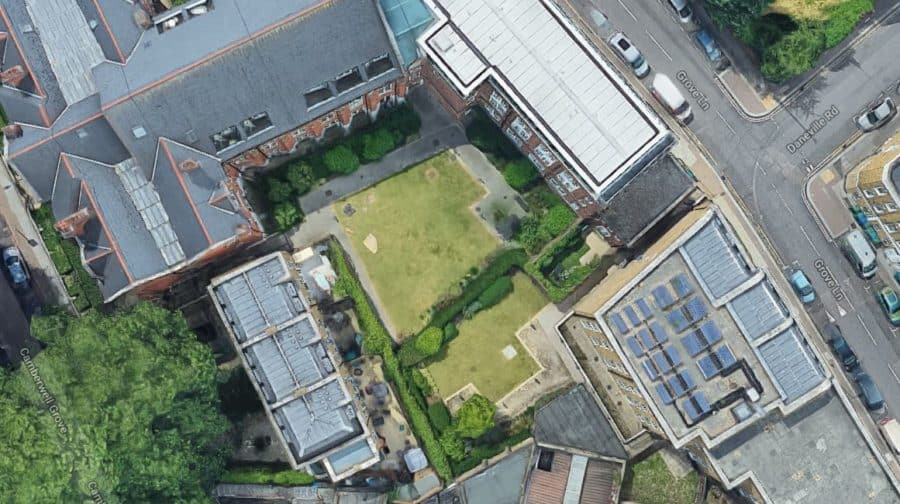 A satellite image showing the complex showing the homes and the hedge it's been claimed 'segregates' residents (Image: Google Maps)

The former Mary Datechlor School site, previously the headquarters of charity Save the Children, was hit by claims of segregation between social housing tenants and private owners following an investigation into segregated play areas by The Guardian newspaper.

The complex has a block of apartments operated by Berkley Homes and an adjacent block by Peabody.

A hedge in a large communal garden reportedly divides the private owners from the other tenants.

However, a spokesperson from Peabody Housing rebutted the claims, saying tenants in both social and private-flats were on both sides of the hedge and enjoyed equal access to the communal facilities.

“All residents at Mary Datchelor House can access outdoor spaces, including the communal gardens,” said a spokesperson.

“The hedge is part of the landscaping in the gardens between two blocks, each has a mix of social and private homes. Both spaces offer the same facilities for residents to enjoy.”

Council bosses and opposition councillors had expressed concern about the prospect of segregation before Peabody carried out its investigation at Mary Datchelor House.

Cllr Johnson Situ, cabinet member for growth, development and planning, said it was not immediately clear from the image what the situation was but that he would be writing to Peabody for clarification.

“It is not acceptable for any resident, irrespective of their housing tenure, to be excluded or treated as second class citizens in any way, under any circumstances,” he said.

“This relates to an historic piece of planning permission dating back to 2007.

“We would always challenge a proposal where segregated sections are included in a scheme, and we have not seen any such proposal coming to committee in recent times.

“While this has not been formally supported by planning policy in the past, the council is making sure this is understood by developers in the future, by introducing a new policy on social regeneration that seeks to address this no sleep disorders.”

“These are not the values Southwark is built on and it really should not be going on in 2019.”

A spokesperson for Berkley Homes, which maintains a complex of apartments on one side of the hedge said told the News would not be commenting on the reports of ‘segregation’.

This segregation in wrong on all levels. Something needs to be done about it. Both sides are paying for where they live. Please sort this out and remove the bushes that caused the division.