In Worthing one woman came up to Michelle and called her an angel, before giving her a pair of silver angel wings 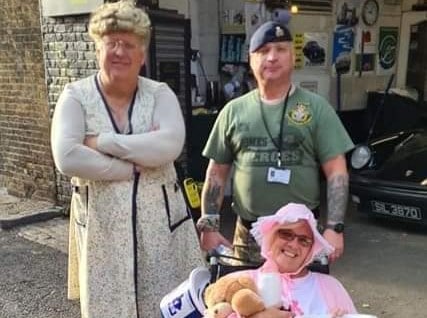 The Pearly King and Queen of Bermondsey and Rotherhithe dressed up as a baby and her nanny to travel about 60 miles to Brighton last week for their homeless veterans charity.

Jimmy Jukes MBE and Michelle Thorpe have raised more than £400 online for their charity UK Homes 4 Heroes and are still counting up the cash they collected en route. They are also waiting for a donation from Sainsbury’s. All in all, they expect to raise about £1,000. 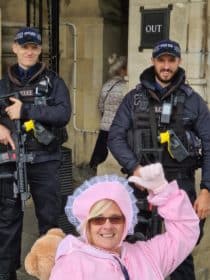 Michelle dressed up as a baby and was pushed by their charity’s ambassador and veteran Carl Newbold from Rotherhithe, through London and down to Brighton on October 14-15. Jimmy was her nanny, driving the support van. 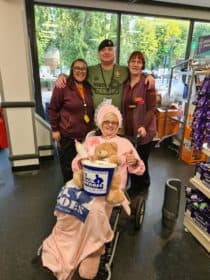 “It was hilarious,” Michelle said. “People kept stopping us and saying ‘what’s going on?'” 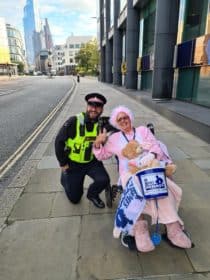 In Worthing, a seaside town in West Sussex, one woman came up to Michelle and called her an angel, before giving her a pair of silver angel wings worth £70. 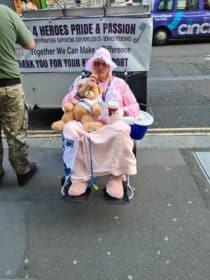 Michelle said she and Jimmy had had a great time but that she was feeling a bit unwell after being out in the cold for so long. Carl, the only one of the three to walk all the way to Brighton is “absolutely fine”, other than a few blisters on his feet, she said.

The fundraiser is still open. Click here to donate.