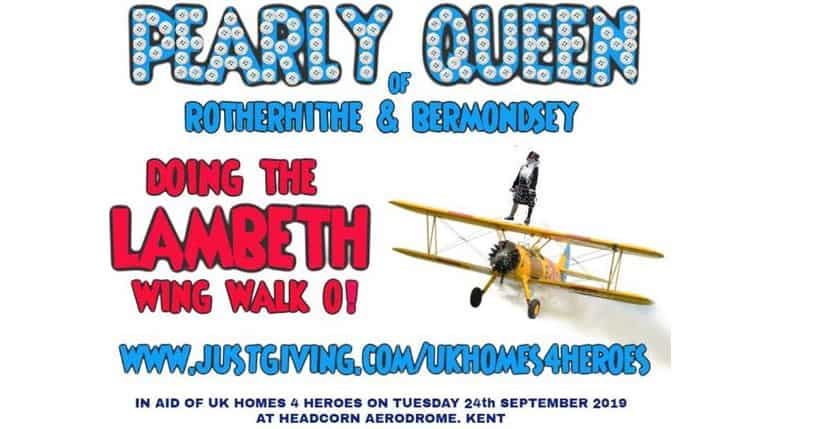 Michelle Thorpe, the 'pearly queen' of Bermondsey and Rotherhithe is undertaking a wing-walk in her ceremonial gear

The pearly queen of Bermondsey and Rotherhithe is to become the first ‘pearly’ to do a wing-walk in her ceremonial gear for charity.

Michelle Thorpe, 53, will be braving a wing walk for her charity, UK Homes 4 Heroes, which helps feed and house homeless ex-service personnel in London.

But the daring feat comes with an unfortunate side-effect – because of the heavy weight of the costume, the 53-year-old will need to lose a stone in four weeks before being allowed on the wing.

“I’m not scared of heights, but I’m scared of dieting!” Michelle laughed.

“We go out on the streets feeding ex-service personnel, but we’ll feed anyone really.

“We also have a mobile shower unit to get them clean – we help all those that want to be helped, but not everyone does.”

While it won’t be the first plane-related stunt Michelle has done for UK Home 4 Heroes – she has previously done a parachute jump in 2008 – it will be the first she has done in her pearly costume.

“Because we’ve got so many boys on the books, we need the money to take them forward in their life,” she said.

She has set herself a target of £1,000 to raise for the charity event, which takes place at the Headcorn Aerodrome in Kent on Tuesday, September 24.

She is doing the wing-walk for her charity, UK Homes for Heroes, which feeds ex-service personnel sleeping on London’s streets

Partner Jimmy Jukes, who also runs Homes 4 Heroes, will not be taking part – “I’m staying on the floor mate!” he told the News.

The tradition of Pearly Kings and Queens are linked to orphan street sweeper, Henry Croft, who collected money for charity in a suit with mother-of-pearl buttons.

Since his death in 1930, the tradition has been carried on by volunteers in several areas of London, including in areas of Southwark.

At the time of writing £140 has been donated towards the fundraiser.

If you wish to donate to Michelle’s fundraiser, you can do here.