Shopper Michael Spooner says he would be lost without Harry's help 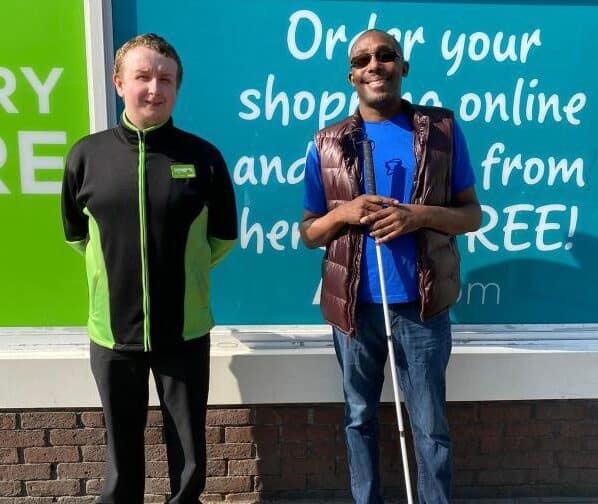 A kind-hearted Asda worker from Peckham has won praise for helping a blind customer do his shopping twice a week.

Michael Spooner, 55, goes in the Peckham branch of Asda at least twice a week and says he would be lost without the help of Harry Turner.

Harry helps Michael around the shop, picking items off the shelves for him, telling him about any special offers and even packing his bags.

Grateful Michael said: “Other staff members do help me, but Harry’s the dude, he’s the main man. We have a good relationship and I’d be lost without him.

“When you’re blind you don’t want any hassle when you go shopping, you want to get the shopping done quickly and that’s what Harry does. He makes it a hassle-free shopping experience for me. He’s cool.

“When we go round the store we have a good chat and catch up on things. What blind people want is routine. They want someone who understands you, can deal with you and cope with you.”

He said he wanted to thank Harry, a 25-year-old worker who has been at the supermarket giant for six years.

“He always asks for me when he comes in and he takes my arm and I guide him round,” he said.

“He has his list in his head and he just tells me what he wants and I pick them and put them in the basket. As I’ve been doing it for so long I know the things that he likes and dislikes.

“We get on really well and always have a chat as we go round whether it’s about politics or funny stories.

“It’s nice to get praise for helping, but I’m just doing my job. It does make you feel good about yourself though.”

The manager of the branch, Shahinuz Zaman, has nominated Harry for a special internal award, saying: “Michael always compliments Harry’s great service and we are all proud of him in store.”