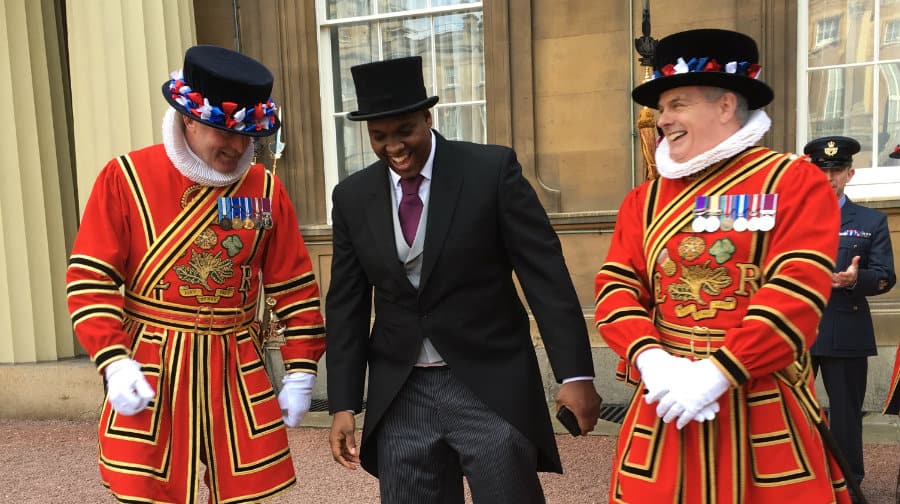 Michael Pusey, aka CK Flash, at Buckingham Palace to collect his MBE

The founder of Peckham BMX Club was given a royal welcome at Buckingham Palace to collect his MBE on Friday.

Michael Pusey, 42, also known as CK Flash, said it was the “best day of his life” when he was awarded the honour for his services to south London’s young people.

He was recognised for his thirteen years running the Peckham BMX Club in Burgess Park, which has nine local youngsters pedalling to represent Britain in this summer’s Olympic Games.

Although used to DJing to huge crowds, the thought of stepping forth to shake hands with Prince Charles still made him feel understandably “anxious”.

“It was a beautiful day being there with my parents and my brothers and taking photos with them,” Michael said.

“Then I went to the track afterwards and celebrated with the kids and it was great to really show everyone at the club – if you really believe in something and work hard you will be rewarded.

“I have to admit I was anxious in front of about 1,500 people at the ceremony but it was one of the best days of my life and it was really inspiring to be there.”

Michael was also glad to celebrate the day with his mum, who he has been looking after at her home in Jamaica following a leg injury.

After the ceremony came the after-party, which continued until 1am. But Saturday was also a day to remember as the track in Burgess Park hosted a flood-lit celebration race with 180 young BMXers.

“I have big plans for the club. I would love it to become a British centre for BMXing in Peckham. All of a sudden people are going to take notice of the club and recognise us,” Michael said.

Michael Pusey at Buckingham Palace with his mum

“The kids here are world level and when you think where we came from to where we are now it’s an amazing achievement.”

The former Choice FM DJ has also worked on music projects with Dizzee Rascal and So Solid Crew, and still DJs at world-renowned clubs such as Pacha in Ibiza. His involvement in youth projects around south London began after fans of his show contacted him asking if he could help create a positive influence on the area’s young people, and the club was founded in 2003.