Magic Carpet Ride tells story of Lord Harris' childhood in Peckham and Walworth, and how he set up a chain of schools 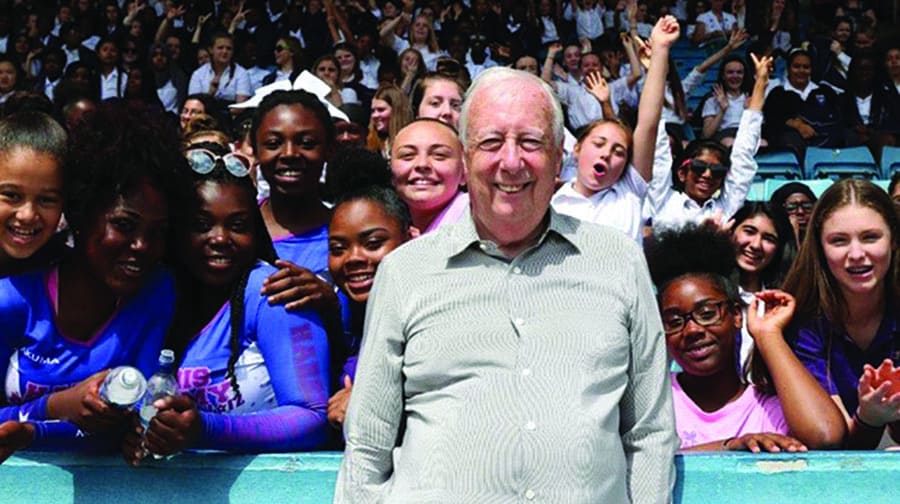 The Carpetright millionaire and Harris Academy founder Phil Harris published his autobiography this month, sharing the story of his Peckham childhood and rise as one of Britain’s most successful businessmen, writes Katherine Johnston…

Despite leaving school with just one O-level and struggling to read and write, Harris went from his father’s market stall on Rye Lane to building a business empire. He was made a life-peer in the House of Lords in 1996.

Although officially known as Lord Harris of Peckham, Harris still goes by Phil and continues to feel a close affinity to his childhood home, crediting his success to his early life in Southwark. Much of Harris’ time is now dedicated to improving education in struggling schools. His chain of Harris Academies includes schools in Peckham, Bermondsey and East Dulwich.

This month, he published Magic Carpet Ride: The Story of my Life, co-written with Ivan Fallon. Speaking to the News, Lord Harris said: “Growing up in Peckham was one the best times of my life. “I remember the war, vaguely. I was only about three at the time and remember being carried down, scared, to an air raid shelter.

“What I liked about Peckham was that everyone was friendly, and Christmas especially was a lovely time. When I was growing up, I couldn’t compare it to other parts of the UK. I didn’t know that it was a poor area.”

In Magic Carpet Ride, he reminisces about the working class characters and Peckham landmarks he knew well. Philip Harris was born on September, 15 1942 in St Albans, where his pregnant mother was sent to avoid the Blitz. He spent the first seven years of his life in a Victorian terrace on Grenard Road, in Peckham. The family had lived in Southwark since the 1800s. His father, Charles, was born in Camberwell, and his grandfather hailed from nearby Newington.

His mother, Ruth Ward, grew up on Blake’s Road. Her father, a rag and bone man, was quite the character: “Sometimes he went on benders, getting so drunk he forgot where he’d left his horse.” But in particular he remembers a strong sense of community. “I remember my dad and mum going to a Salvation Army club near our Harris Academy today. It was near Peckham Fire Station and a place called Kennedy’s that sold sausage rolls.

“The club was in the basement next door and we went parties once every few weeks. I used to love the Christmas parties at Peckham Town Hall. My nan would take me to Walworth Road to buy chestnuts.

“Little things, like the trough for horses on Blakes Road near Southampton Row, and going to get sarsaparilla drinks by the Walworth Road, stay in my mind.”

Was he always an entrepreneur? “Aged four, I sold holly and mistletoe at the Half Moon pub in Herne Hill at Christmas for sixpence a bunch,” he laughs.

Harris grew up plying his trade with his father, a war hero who became a professional lightweight boxer after being demobbed. Charles Harris fought in south London and the East End, eventually saving up enough winnings to open a lino stall in Rye Lane market. By the 1950s the family had moved to Thornton Heath and had opened two shops, one on Peckham High Street and another in Penge. Harris had no idea that his father was awarded the Military Cross for ‘exemplary gallantry’ until after his untimely death from stomach cancer at 39. In Magic Carpet Ride, he reveals that Charles served in Germany at the end of the war and helped combat a German counter-attack in the town of Wildeshausen in 1945.

He writes: “Charlie jumped to his feet and, shouting for the troops to follow, he leapt forward shooting from the hip.

“The Germans were overrun and the survivors retreated through the backstreets, followed hotly by British troops. After a thorough search of the area, Charlie reported back that it was clear of the enemy.”

After his father’s death, the Sixteen-year-old Harris left schooling and took on the ailing family business. How did he turn things around? “In the evenings I used to catch buses and go round to other shops from Peckham to Penge. I learnt what other businesses were doing. That’s where my success started.”

By 1993, Harris’ Carpetright business had 100 shops across the UK and was valued £114 million on the London Stock Exchange. Lord Harris may be worth millions today but his achievements didn’t come overnight, or easily.

In Magic Carpet Ride he explains: “I’ve never read a book, I can’t write a letter and I can barely read a speech. “But I can read a balance sheet, dictate letters, and if I’ve got to give a speech I can do it.

“Dyslexics have a way of finding creative ways around their difficulty.” This experience was channelled into a life-long commitment to help others benefit from education. In 1989 he was approached by Margaret Thatcher to sponsor the failing Sylvan Grove comprehensive in Crystal Palace. Five years later the pass rate for GCSEs went from 5% to 57% and the school became a blueprint for the chain of Harris Schools he set up in London. The school’s model later inspired the academy school system rolled-out by the government.

Today the Harris Federation runs 44 state academy schools, mostly in south London. Harris, who lives in Kent with his wife Pauline, visits regularly and is proud to take a hands-on approach. “I spend a day and a half a week visiting our schools across the country. I do like meeting the kids in Peckham. I’ve always treated Peckham as my home.

“We’ve got six schools in the area and I just think it’s a great place. I’m so glad it’s getting back to what it used to be like.”

“One in 44 children in London go to our schools. They may have six or seven jobs but they only get one chance in life to go to school.”

John Major, who wrote the forward to Harris’ autobiography, predicts: “In fifty years’ time, there will be many successful – even eminent – men and women, who will owe their success to the education that Phil Harris made possible for them.”

How did a retailer with a less than distinguished academic record prove so successful in education? “I think with anything, including running schools, hospitals, businesses, you need motivation and to be able to get on with other people.

“Whatever skills you’ve got, it’s about motivating people to get the best out of them.” A particular passion is encouraging dyslexic children to aim high. “The one thing I do when I meet dyslexic children is tell them I am dyslexic and I’m not ashamed of it. “In my days people thought you were backward but now we teach dyslexic children foreign languages. “People just needed to realise that dyslexic kids need a bit of extra help and then they can get over their difficulties and succeed.”

At 75 years of age, Harris is as driven as ever and still has ambitions for Peckham. “I’d like to take over any failing school in the area and would love to get some of the lovely old buildings cleaned up to what they were like 60, 70 years ago.

“I’d like to see more clubs for kids, too. We need all the run-down clubs and centres done up.”

Philip Harris, with the carpets that made his fortune circa 1985

Lord Harris explained why he decided to write his book: “It was not so much to give my history, but to motivate children from poor areas that they can be successful and, hopefully, if they are successful, to encourage them to give some money back to society.”

As he writes in Magic Carpet Ride: “Although I was born in the middle of a world war and grew up in a time of austerity and rationing, I wouldn’t change anything about my life.”

Magic Carpet Ride is published by Biteback Publishing and available to buy on Amazon. www.amazon.co.uk/Magic-Carpet-Ride-Philip-Harris/dp/1785902016