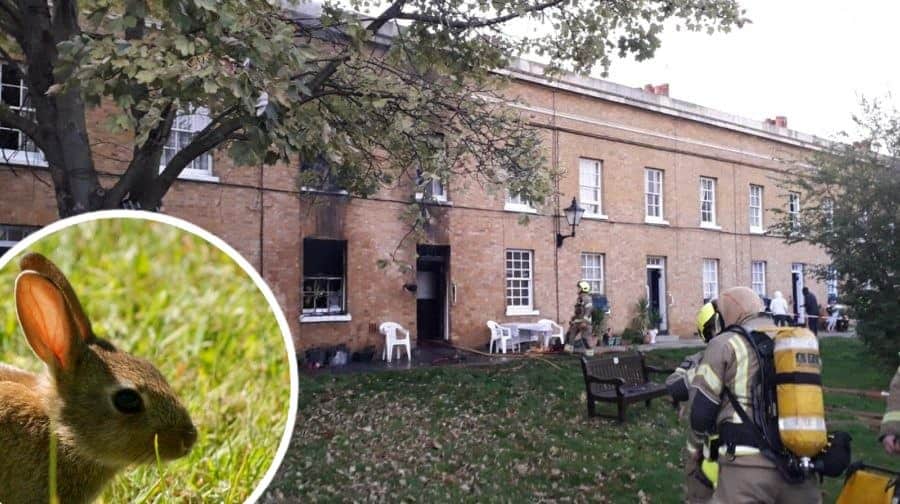 A quick-thinking bobby rescued a pet rabbit from certain death in a large house fire in Peckham.

The daring rescue came moments after a resident was hauled from the blaze by an eighty-year-old pensioner.

A devastating fire engulfed a flat in Peckham’s Caroline Gardens on Bonfire Night, sparking more than a dozen calls to 999.

A woman was rescued by a pensioner, Dave Moorcroft, who plunged into the smoke and flames to guide her to safety.

But he was not the only hero of the hour – as Peckham bobby PC Moroz rushed to the back of the flat to save a pet rabbit, belonging to the person whose house caught fire.

The officer was told the rabbit was still trapped in its hutch at the back, even as huge flames wrapped themselves around the owner’s house.

According to Southwark police, the copper managed to rescue the beloved rabbit just as smoke was pouring through its hutch.

The modest officer has not spoken publicly about his courageous endeavour, which has won praise from senior colleagues.

But Inspector Tom Cornish told the News the PC’s actions saved the cherished pet from a horrible death.

“I am proud of the courageous and compassionate actions of PC Moroz who faced danger to rescue a cherished pet,” he said.

“Without his actions the rabbit would have suffocated or burned to death causing further distress to the resident whose house was on fire.”

Almost all of the home’s ground floor, and half the upper floor, was damaged in the fire, and many of the possessions inside were damaged.

Residents of Caroline Gardens have already spoken of their admiration for retired painter decorator, Dave, who rescued a woman from the fire.

Bryan Emery, who lives with his wife Lea a few doors down, said: “What Mr Moorcroft did, at enormous risk to himself, was a life-saving rescue of a young woman who has her whole life ahead of her.”

Mr Moorcroft also helped with the bunny rescue, police told the News, by lending them a cat basket to carry the rabbit to safety.