Cakes, letters and all sorts have been found on their door step ever since they took on their goal to inspire Peckham 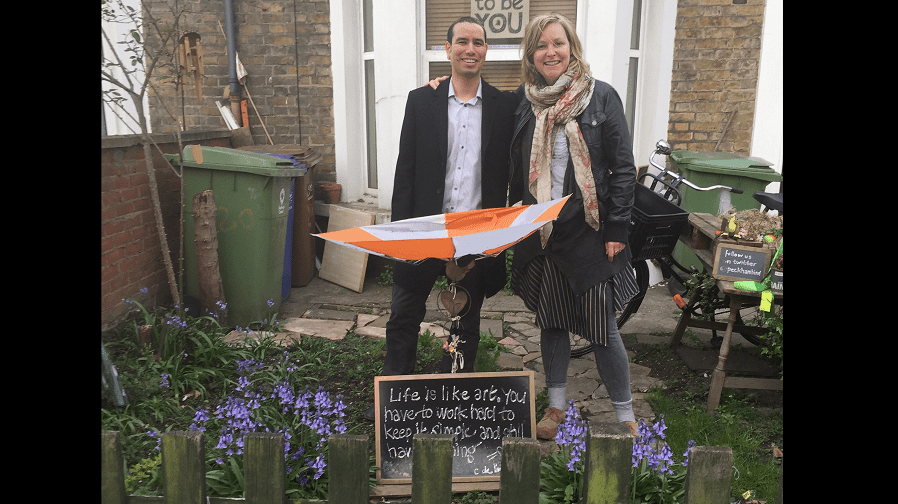 A Peckham couple say they have been overwhelmed by gifts and kind messages from neighbours who love their ever-changing front-garden display.

Every day, Margit Mulder and Dom Sbicca write a unique and intriguing message on a chalkboard, leaving it for passer-by to read as they walk past their house in Asylum Road.

They have kept up the positive messages since June 2014, and have since been given cards, cakes and hand-written notes. The 47-year-old Margit even had one person tell them the little pick-me-ups helped saved their life.

“We change it all the time, but it’s always something positive, inspiring, or aspirational, and encouraging,” Margit said.

“My favourite one has been a quote from Oscar Wilde: ‘Be yourself – everyone else is taken’.

“It’s about empowering people and giving them self-belief and trying to make the most of every day. We always want the message to say something inspiring and uplifting.

“I often just come home to find letters from people on my doormat with people telling me how the sign really changes their mood and gives them a lift every time they walk past.”

Margit, an illustrator and brand developer who has worked with Saatchi & Saatchi and the Body Shop, said one day a woman knocked on the door and told them their messages brought them back from the brink.

“We had a knock on the door one day from a woman who said she was going to end her life. She said she was walking past and then she saw one of our blackboard messages.

“She said it changed everything for her. We’re now good friends and we keep in touch.”

Margit says the peculiar story started after a man came out of the blue and offered to help with some difficult-looking gardening.

“We were trying to get rid of a massive plant that we nicknamed the Big Friendly Giant, and this man saved us the trouble of getting professional help and removed it for us,” she said.

“But we didn’t exchange phone numbers and I wanted to thank him somehow. So I put up the sign telling him to say hello if he ever walked past.

“We didn’t hear from him, but we got loads of reaction from other people, and it just made me realise how much people really do like to read and give a friendly response to things they see.”

Margit, who is also studying to be a wellbeing practitioner for children with domestic issues, said it gave herself and her husband the idea of doing something different with it every day.

If you want to enjoy their daily messages, but aren’t in Peckham, you can see each day’s update by following @MonkeyMargit on Instagram or @PeckhamBird on Twitter.