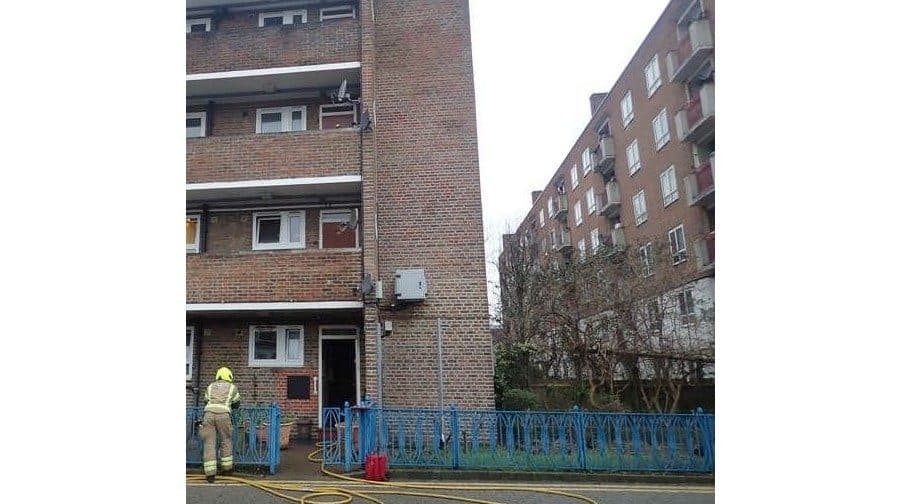 Fifteen firefighters rescued a woman from a burning Peckham flat on Wednesday.

Firefighters have described the “heavy smoke” pouring out of the windows of that flat on Goldsmith Road shortly before 2pm.

They rushed inside wearing breathing gear to find the woman in the living room of her ground floor flat.

She was taken to hospital for treatment by paramedics.

Fire Investigators believe the fire was caused by a naked flame being used to light a gas heater accidentally falling on to ignitable materials. Part of the five-roomed flat remains damaged by the fire.

“On arrival we could see heavy smoke coming out from the windows of the flat,” said Stuart West, from the Old Kent Road fire department, who was on scene.

“Crews quickly entered the building and rescued a woman who was in the living room of a ground floor flat, who was then taken to hospital.”

He issued a warning about the dangers of using naked flames to light heaters, especially if there is ignitable material around.

“If you use items like matches or lighters at home, be especially careful if you have a lot of flammable items, like books, magazines or papers,” he said.

“We’d also like to remind people who may be using portable heaters during the colder months to make sure that heaters are well maintained and in good working order.

“Don’t take risks with older heaters, if it’s showing signs of damage replace it with a new one or get it tested and repaired by a qualified technician.”

Heaters should also be positioned away from linen or furniture, and in a place where they won’t get knocked over, Mr West added.

Three fire engines attended the scene, and managed to get the fire under control in an hour.