A letter from the Queen, live music and old friends were the order of the day for Winnie 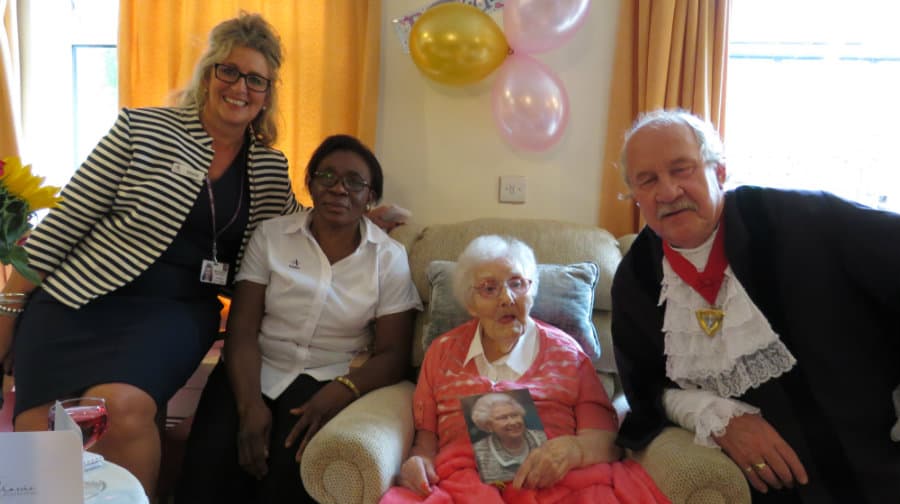 A 106-year-old Peckham girl was thrown a touching birthday party on Tuesday, and received a hand written card from Her Majesty the Queen.

It was smiles all around for Winnifred Williams, as she celebrated the momentous achievement in the company of friends and carers at the Greenhive home in Brayards Road.

Although unable to say too much herself, Winnie told the News: “[I’m having a] very good time, thank you.”

Stories were told of her life and times and Winnie’s best friend, Grace Watson, said: “I met Winnie 35 years ago when I was working in another care home in Sumner Road before she moved to Greenhive in 2002.

Although hugely popular at the care home, Winnie has no known relatives, and was an only child. She was born in 1910 – the year  before George V was crowned King – and she attended Rockingham Road Elementary School in New Kent Road.

“She once worked as a nurse in Leytonstone,” said Grace, who also grew up in Peckham and now lives in Orpington.

“Winnie loves music and has hundreds of vinyl records and CDs, and she was a great dancer. Her favourite artists are Aled Jones, Anne Shelton and Doris Day.

“When I first looked after her she was a very big reader, and would love writing letters to people.”

Also at the party was deputy mayor of Southwark, councillor Charlie Smith, and entertainment was provided by a live band, who had residents up on their feet singing and dancing.