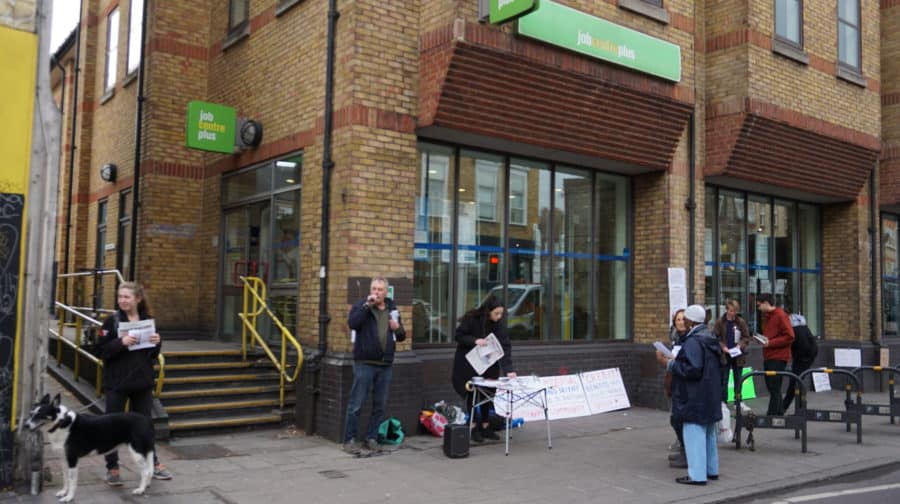 Peckham Jobcentre was subjected to a loud but friendly group of demonstrators today and there are plans to do the same on the last Friday of every month, writes Josh Mellor…

The group are picketing the centre because of Universal Credit, the new benefit payment system that combines six former benefits or tax credits into one payment.

Picket organisers, the South London Revolutionary Communist Group, claim the Peckham Jobcentre Plus has the worst record in London for sanctioning claimants and withholding their payments.

In 2015 the News reported government figures that showed Peckham Jobcentre had the highest number of sanctions, where payments are stopped as a punishment for not turning up to an appointment, in the capital.

But Jobcentre Plus says that it makes clear that if a claimant disagrees with a decision, they can ask for a decision to be reconsidered.

“People would be less willing to work for low pay insecure jobs if they didn’t feel forced, that’s why Universal Credit is pushing people in that direction.”

Mr Rayne said they wanted to see people being given appropriate employment at a living wage.

Plenty of passers by stopped to chat with the demonstrators over their lively music and to sign their petitions calling for an end to Universal Credit.

The News spoke to 51-year-old carpenter Ian Josiah who had come to the centre to request his payment which was due yesterday.

Recently unable to work due to claims of sciatica Mr Josiah said he struggles to navigate the system with his dyslexia and was visibly disheartened.

He said: “I couldn’t even fill in the sickness payment form due to my dyslexia, I couldn’t fill it in, got a friend to help me but they said it was too late, how can it be too late?

“I’m still sick, it’s not like I’ve got better.

“Literacy is a real burden as you have to use the computer and that’s hard for me.

“I’m a carpenter and have been working all my life, but just can’t work at the moment with my sciatica, it’s a catch 22.”

Mr Josiah said he hoped he would be able to get a payment that day so that he could get his electricity and gas back on otherwise it would be ‘a harsh couple of days’.

A young woman, who declined to be named, said she had a child and claimed Universal Credit, she felt that there were two sides to a lot of the stories and that people could be doing more for themselves too.

Earlier in the year she says she missed an appointment and was sanctioned ten pounds a day, which didn’t sound like much but claims it added up to £300 a month.

She said she counted herself as lucky because she got family support as well, but really felt for people out there who had no other options.

A Department for Work and Pensions spokesperson told the News: “The latest statistics show that fewer than three per cent of Universal Credit claimants have a sanction – they are only used when people don’t fulfil their agreed commitments to look for work.”