“We all played an essential role in helping South Korea regain its independence,” veteran said 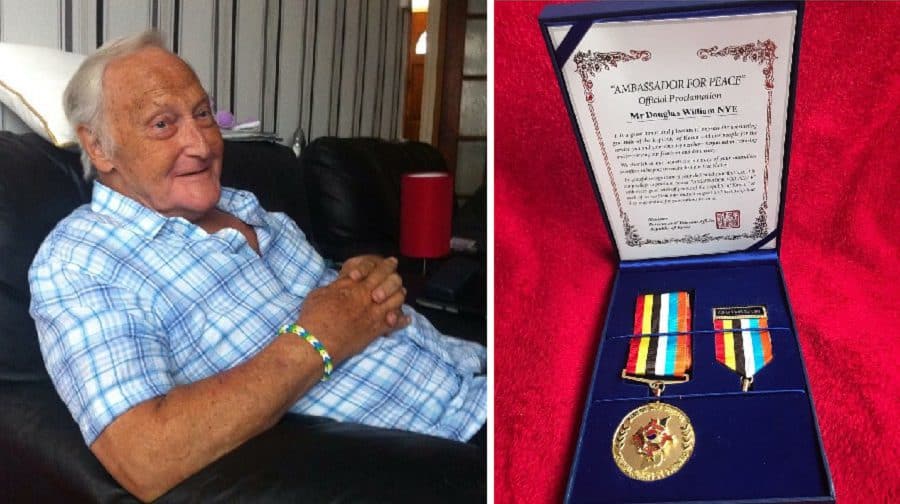 Douglas Nye and his Ambassador for Peace medal

A Peckham man has been honoured with an Ambassador for Peace medal for his role with the United Nations during the Korean War.

Douglas Nye, 85, was stationed in the Korean peninsula as a corporal in the Royal Engineers between 1951 and 1953, in a campaign that saw the US and international troops defend South Korea from invading North Korean forces and Chinese allies.

Though Douglas is unable to speak due to a breathing condition, his family emailed the News with information about his time there.

He said he joined the army at the age of seventeen, seeing it as “an adventure”.

He was stationed at the front line, as a driver and wireless operator, and as body guard for Colonel Peter Moore.

After Moore was discharged, Douglas was “in charge of radio signals and getting telephone lines laid. That was a significant role as getting messages in and out was so important”.

Asked if he was stationed with other south Londoners, Douglas replied that he once found himself stationed with a young Michael Caine, who fought as an infantryman.

Douglas added: “We all played an essential role in helping South Korea regain its independence.”

Douglas’ daughter, Stephanie Larby, with whom he lives, told the News: “I was very proud. Nine of us went to the presentation when he received the medal. I started crying.

“Dad’s a very non-emotional person, although we can tell he feels it. He won’t talk about his experience in the war at all. I think he saw a lot of awful things.”

Stephanie, 52, said her dad had lived in Peckham for more than 30 years, and worked as an accountant after the war.

He was born in Croydon, and lived there until he joined the army.

“He’s had a full life,” Stephanie said. “His health is very good for his age and he’s still active.

“He’s also got loads of medals. Three are on display in our lounge, and there’s others in his room. But he’s very modest about them, and for all the things he’s done. He just says they were ‘a part of his life’.”