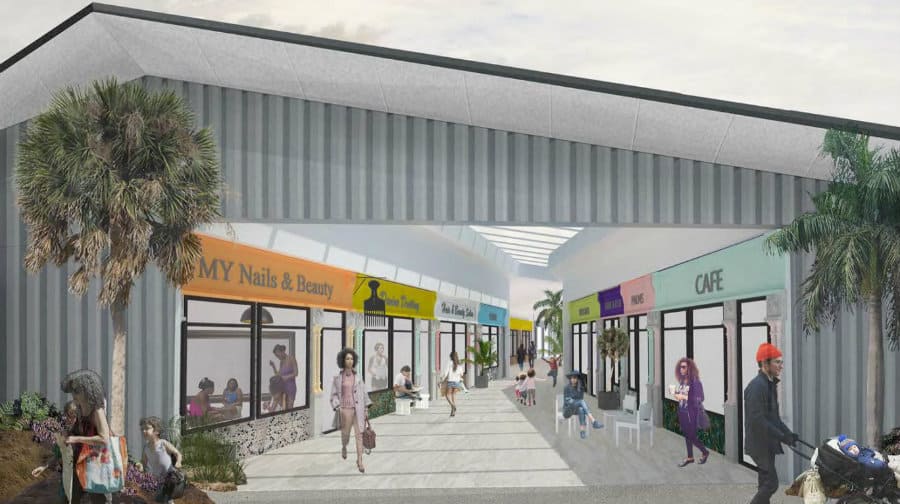 Southwark council has approved its plans to relocate the afro-Caribbean salons to a new shopping area in Peckham before the Peckham Rye Station Arcade is demolished.

The decision by the council’s planning committee means £1m will be invested into building the shopping hub for thirteen units along Bournemouth Close, with proposals also in place for cafés and restaurants. Designs so far show it will be lined with palm trees, with a roof canopy, and has been nicked named Peckham Palms.

The parcel of land running parallel with Rye Lane is occupied by twelve, mostly disused garages, that were owned by residents of the adjacent Atwell Estate, until the council made a forced buy-out on April 4.

But the decision has upset families living in the adjacent Atwell Estate, whose homes back directly on to the site.

Several residents had raised concerns during public consultations about the added noise, litter and anti-social behaviour they fear will be brought to their neighbourhood.

Treasurer of the Atwell Estate T&RA, Shirley Nield, 73, said: “The council don’t listen, they will just do what they are going to do. They don’t listen to normal people so we will just put up with it.

“We’re already sick of the noise here and having these shops and a bar at the end of our gardens will make it even worse. On a hot day like this you want your bedroom window open, but we just won’t be able to. And this estate is screaming out for parking bays.

“How can the council be allowed to just put a load of shops and a bar next to people’s homes? We have our fingers crossed it will die a death, or that the whole thing will be a flop for the council.”

Manager of the Divine Destiny hair salon in Blenheim Grove, Omo Rhuasa, 55, said: “I don’t like the idea at all. We have a really strong community here already, and we make money by people coming in and socialising and deciding to buy things as they walk past.

“These salons are famous all over the country. People in Birmingham and Liverpool come here. People won’t notice us if we’re over in Bournemouth Close.

“I understand why the Atwell Estate residents are upset. They don’t want to have loads of noise from businesses right by their houses. It’s a residential area.”

The council announced in May that it was seeking a company to manage its planned Peckham Palms development, which it hopes will be a hub for make-up artists, manicurists and hair stylists, as well as other independent traders.

Councillor Mark Williams, Southwark Council cabinet member for regeneration, said: “We want to not only make sure the businesses relocating to Peckham Palms get the full business and marketing support they need to get their customers to move with them, but also to help them grow and for the area to become the number one spot for afro-Caribbean hair and beauty in London.”