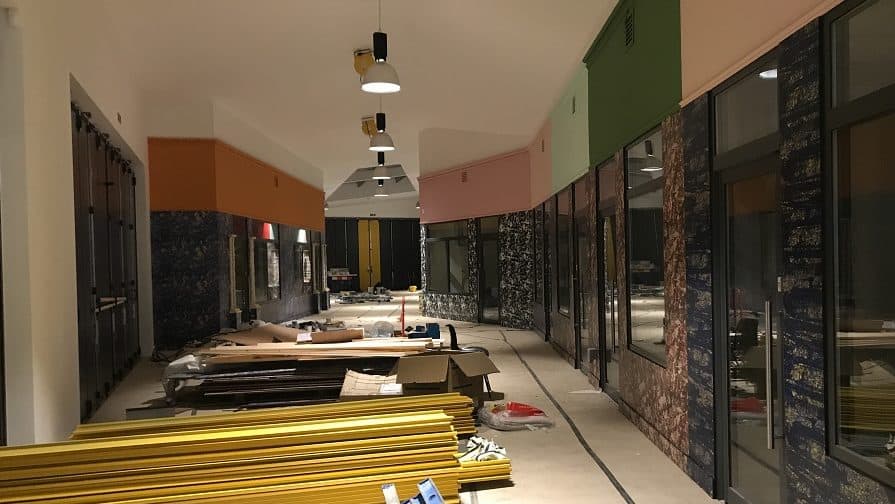 A sneak peak while building was still underway...

The new Peckham Palms afro hairdressing centre will take the stress out of the high-stakes world of freelance hair styling and help black businesswomen benefit from regeneration, says its director.

Monique Tomlinson, aged 41, from Brixton, is one of four directors recruited by Southwark Council to set up Peckham Palms as a space for businesses relocated from Blenheim Grove during the on-going regeneration of Rye Lane.

In its early stages the scheme had attracted controversy, with neighbours to the Bournemouth Close site concerned about noise and some salon owners and stylists fearing the move to a Rye Lane backstreet was a sign of gentrification to come. Monique, one of the Palms’ directors

The Palms will soon open to the public under a 20-year lease from Southwark Council. It is currently owned by Something & Son, which will manage the centre for two years and within five years of opening transfer ownership to the local community.

Monique has spent three years speaking to the hairdressers and Rye Lane businesses about the project as well as their customers and people who come to Peckham for its renowned hair salons.

She said that beyond the imminent need to move, the Palms will offer much more support as life as a freelance stylist is tough work.

“The hairdressers on Blenheim Grove are completely different to the other businesses along Rye Lane,” she told the News while giving a tour of the new premises.

“There are mums and a lot of the work is cash-in-hand, they rent the chair for day and are not necessarily sub-letting a shop of their own.”

She is brimming with praise for the entrepreneurs, but says not everyone was happy with the set-up on Blenheim Grove.

“I’ve heard of customers walking the long way around to avoid the street, as stylists are fighting for every customer.

“And on the other side we have some customers who leave without even paying.

“These are mums working hard who do not have the time to formalise their business and work out how to grow.

“Not all of them can come over to the Palms because they have unclear immigration status.

“It is very hard to register a business as self-employed if you have no recourse to public funds.

“But we want to help them with education, training and mentoring too even if they aren’t based here.

“With Peckham Palms we can take the stress out of the situation and be a support in every which way.”

There will be Fortnightly business clinics open to them and businesses in Rye Lane for the stylists.

“Most young black girls know how to braid from childhood.

“Ghana braids, Senegalese twists, it’s all about practising and skill, but they may have gaps in knowledge and no formal training.”

Monique and her team hope to give them the opportunity to learn about hair care, be mentored by other professional stylists, and be able to cut, dye and treat hair, all using organic, ethical products.

Harsh chemical products and illegal skin whiteners have no place at the Palms, where people will be encouraged to ‘love themselves and their hair’.

“People said they want to come to a salon that is clean, no food lying around, no broken chairs, where they’re not being harassed, with a bit of quality about it,” Monique says. A show unit at Peckham Palms

The Palms will have disabled access and a separate kitchen, and in total 28 spaces for hair stylists and four for beauticians, along with a fully functioning and licensed bar and food kiosk.

The space is divided up into smaller and larger rooms for individual salons and there is space for regular pop-up salons to draw in the crowds with big names.

Stylists can’t bring their kids to work at the Palms for health and safety reasons, and Monique says they are trying hard to get these children funded places at nursery, acknowledging that informal, freelance work is a draw for parents. The aim is for all of the stylists to eventually earn a London Living Wage – not just the salon owners.

Although it won’t work for everyone, she’s optimistic the project can really push black female entrepreneurship.

“When we first started this project they were all a bit wary but they are really, really excited now,” she says.

“Everyone will tell you that the high street is dying and it is all about the experience now – that’s how we can make Peckham Palms a success.”